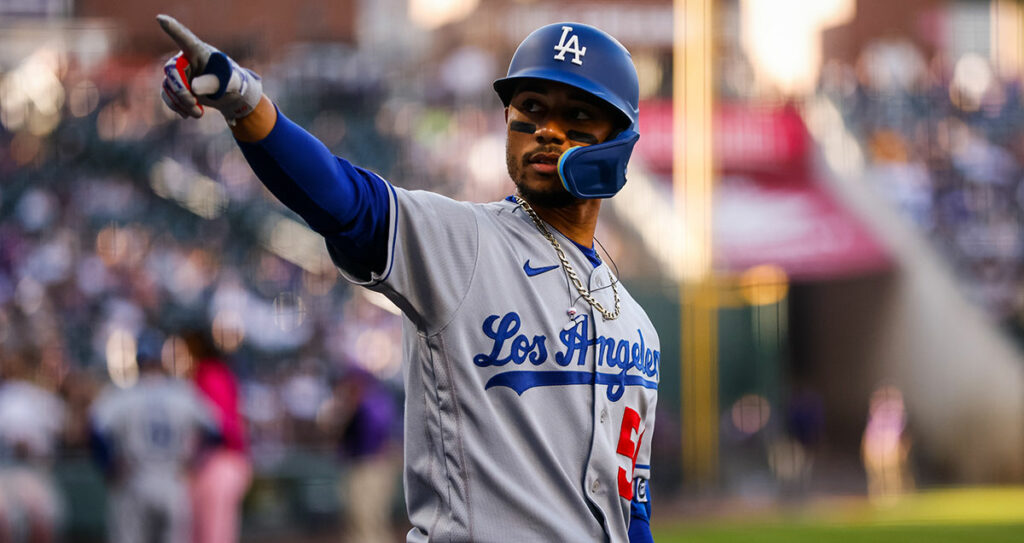 We like Mookie Betts and the Dodgers as one of our 3 MLB best bets on Thursday.
By Mike Noblin on July 21, 2022

After a first half that saw us go 47-29, we'll look to get off to a hot start after the All-Star break. The overall goal remains the same: find the top three to five plays each day on the MLB board to help us build the bankroll before football season starts.

It's a light card with only six games, but we did find plenty of value to take some shots. Here are 3 MLB best bets for Thursday, July 21. Let's start off the second half on the right foot!

This is an early 1:10 Eastern start time so get down on this one early if you want to play it. The All-Star break couldn't have come at a better time for the Texas Rangers. After flirting with a .500 record on several occasions, they were swept by the red-hot Seattle Mariners just before the break.

Texas will turn to Jon Gray with the hopes of ending their four-game losing skid. Gray looked great in his last outing against the A's, as he struck out nine and allowed just one hit through seven innings of work. We expect Gray to build on that momentum against a Marlins lineup that will be without Jazz Chisholm and Jon Berti, who are both on the injured list.

The Rangers offense is led by two guys that the team paid a pretty penny for this past offseason. Texas paid Corey Seager and Marcus Semien a combined $500 million to add some punch to their lineup. So far, it's working out well, as the two have combined for 35 homers this season.

No, this is not a misprint (lol). We have made a bundle of cash by fading the A's this season but this price is just flat-out wrong. The Tigers are just as bad as the A's, which is why we have this line closer to a pick'em.

Detroit has actually been worse than Oakland in some offensive categories like runs per 9 innings and home runs hit. The A's have also played better of late, as they took two of three games against the mighty Astros just before the break. Meanwhile, the Tigers have lost four in a row and just can't seem to generate any offensive production.

The pitching matchup in this game is still somewhat of a mystery. Even still, we think the price is way out of whack and will back the A's, even if it takes a shot of liquid courage!

We have the Dodgers as the third-best team in baseball behind the Yankees and Astros. Even though we hate fading a solid starter like Carlos Rodon (8-5, 2.66 ERA), we can't resist getting the boys in blue at such a cheap price at home. The Dodgers have won 15 out of their last 17 games and we see them picking up right where they left off.

Since the All-Star game was hosted in Los Angeles, none of the Dodgers' All-Stars had to deal with any type of travel headaches. This means that they'll be rested and ready to do battle against the G-Men. The Dodgers will also be out for some revenge since the Giants swept them in June.

The Dodgers have been tough to beat at home (30-13) while the Giants have been only average on the road (22-21). We'll back the team with the stronger lineup and the better overall bullpen. Lay the small number.

Let's make it a thrilling Thursday everybody! It's great to be back!