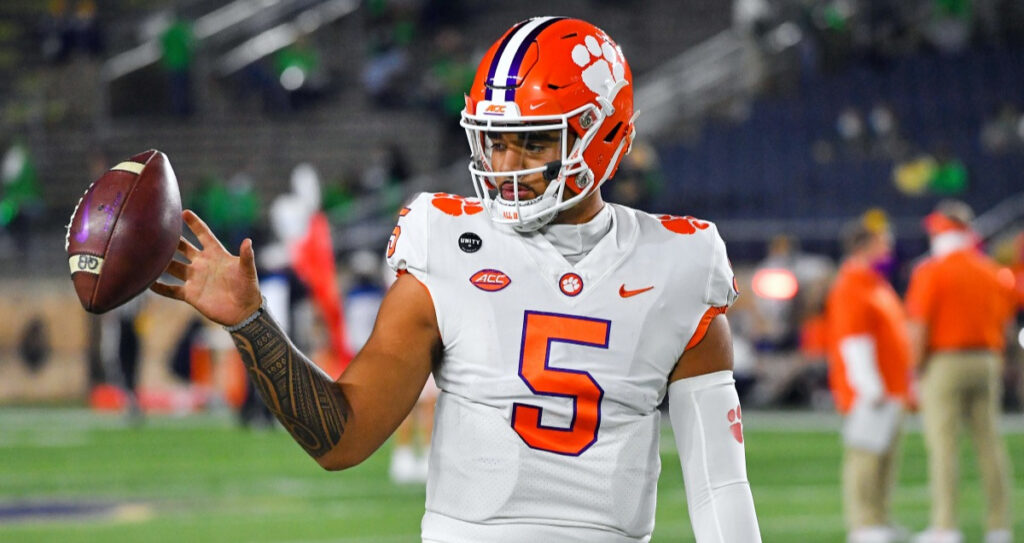 He's had a tough season but we think DJ Uiagalelei will shred UNC's porous defense on Saturday.

Our Week 13 plays brought the regular season to a close on a winning note. We finished 2-1 to close the season on a 4-1-1 run thanks to another all-world performance from Michael Penix Jr. and a strong rushing total from Will Shipley in Clemson’s upset loss to archrival South Carolina.

Max Duggan ended TCU’s regular season on a high with three touchdown passes in a Horned Frogs’ rout of Iowa State to mark our only loss in the last two weeks.

Conference championships are upon us and it’s only right that we step up our game to match the intensity of this weekend. Let’s get right into our player prop best bets for this week.

The third-year Clemson quarterback has improved his passing numbers every season of his college career but has battled negative public perception thanks to the Tigers losing multiple games each of the last two years.

Despite throwing for a season-low 99 yards and completing 28% of his passes in a loss to the Gamecocks he has a nice bounce-back spot against the Tar Heels in the ACC Championship Game on Saturday.

North Carolina is 116th in the country at defending against the pass and allows 273 yards per game to opposing quarterbacks. Uiagalelei’s performance against Wake Forest, who is tied with UNC in passing defense in 2022, marked his best game of the season with 371 yards and five touchdowns.

We see him correcting last week’s woes to lead Clemson to an ACC title this weekend.

After looking it up, rubbing our eyes, squinting, and checking again, we think it’s worth mentioning that TCU ran the ball a whopping 56 times against Kansas State in their October matchup this season.

Miller accounted for 29 of those carries, 153 yards (5.3 yds/rush), and two touchdowns in a Horned Frogs’ home victory. One might think that K-State would try and shore up that vulnerability on defense, and they did. Temporarily.

After they stifled Oklahoma State the next week they then allowed 269 yards on the ground to the Texas Longhorns to cement the fact that they simply have a weakness against power running teams. Miller will carry the ball early and often in their second battle this season with the Big 12 title on the line.

These two cross-division SEC rivals have played just four times since 2010 and only twice in the last five seasons. Georgia is a completely different program since the last time they met and is allowing less than 80 yards rushing per game in 2022.

The fact that quarterback sacks also subtract from their rushing total in the college game gives us that much more confidence that Daniels won’t be able to overcome a terrifying Bulldogs’ defense with his legs. This Georgia team was built to stop Nick Saban’s factory of running backs and mobile quarterbacks and Daniels fits that mold.

He will face a similar fate as Bryce Young did in last season’s national championship game when the Heisman trophy winner had -43 yards rushing.