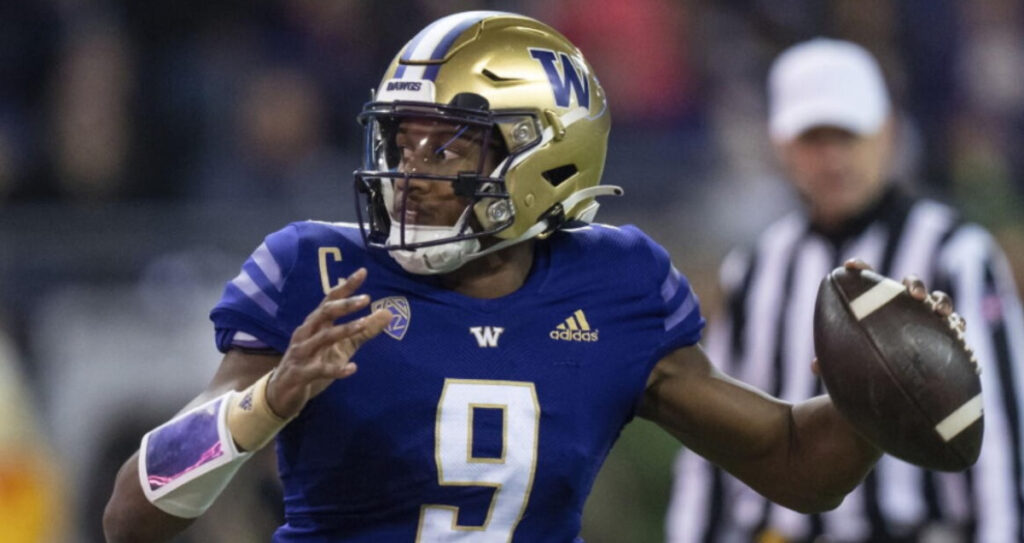 One of our 3 college football best bets for Thursday is on Michael Penix Jr. and the Washington Huskies.

After a painful 1-3 performance in yesterday's bowl games, we're eager to right the ship. How in the world did Arkansas blow such a big lead and end up giving us a loss by the hook? Anyway, it's time to move on!

There are 3 games on today's CFB bowl schedule, and we've found some value in each one. Here are 3 college football best bets for Thursday, December 29. Best of luck with all of your action as we head toward 2023!

The Orange finished a respectable 7-5 on the year, but losing 5 of their last 6 was extremely disappointing. That said, they did play well in the finale, where they defeated Boston College on the road 32-23.

Garrett Shrader led the offense behind center, where he threw for over 2300 yards and 17 touchdowns while adding over 400 yards on the ground and another 7 scores.

Minnesota won 4 of their last 5 games to finish their season 8-4. A road win over Wisconsin in the finale 23-16 capped off what was a rocky season.

Mohamed Ibrahim came back from injury this season to run for over 1500 yards and 19 touchdowns. He was pretty much the extent of their offense. The defense did finish 3rd in the country, allowing just over 13 points per game to opponents.

Syracuse is going to have some serious trouble against this stout Gopher defense. Ibrahim should allow Minnesota to control the time of possession, and being 7th in the nation in a 3rd down conversion rate, we see Syracuse simply not having much time with the ball to score.

This is a whole lot of points to swallow, but we're confident that the Gophers can get it done by at least a couple of touchdowns this afternoon!

No one expected the Sooners to set the country on fire after head coach Lincoln Riley and starting QB Caleb Williams bolted for USC. They finished 6-6 and lost 3 of their last 4.

Eric Gray was steady on the ground all year for the Sooners as he rushed for over 1350 yards and 11 touchdowns. Dillon Gabriel was a consummate leader running the offense and throwing for nearly 270 yards per game and 24 touchdowns to just 6 interceptions.

The defense did struggle week in and week out to keep points off the board, and that was their Achilles heel. The Sooners just couldn't get off the field on third down, which led to some serious meltdowns.

After losing 3 straight games, all to ranked opponents, midway through the season, the Noles found themselves at 4-3. From there, they ran the table and finished a solid 9-3 on the year.

Jordan Travis used his ability to be a dual threat to lead the Noles offense. He threw for almost 2800 yards and ran for almost 400, and was responsible for 29 touchdowns and just 4 interceptions.

Offensively, both of these teams have squads with the ability to put up large numbers on the scoreboard. However, the defense is where the big difference lies.

FSU is 26th in the country compared to Oklahoma, who is 185th in points allowed per game. The Noles are also 10th in the country in 3rd down efficiency at 51.9%. Noles win this one in blowout fashion.

The 8-4 Longhorns finished up winning 3 of 4 over the final 4 games. The lone loss came against then #4 TCU.

Quinn Ewers was good when healthy for Texas. He averaged 200 yards per game through the air and put up 14 touchdowns but also threw 6 interceptions.

Bijan Robinson had been the bell cow all season and ran for over 1500 yards and 18 touchdowns on 258 carries. He is out for this game as he preps for the NFL draft.

Washington had a great season. They started out 4-0, including a win over then #11 Michigan State, before losing back-to-back games and then winning the rest of the way out to finish 10-2.

They smoked in-state rival Washington State 51-33 in the season finale. Michael Penix Jr. was arguably the most impactful transfer, as he led the Huskies with an average of 360 yards per game through the air and 29 touchdowns.

Rome Odunze and Jalen McMillian were his favorite targets, as they both went over 1000 yards on the season and combined for 15 touchdowns.

Texas being without their biggest offense threat, Bijan Robinson, is simply not going to have enough to keep pace with the pass-happy Husky offense. Texas had higher bowl hopes, so you have to question their motivation in this spot.

Michael Penix will look to put a cap on what has been an amazing season, and we believe the Huskies win this one outright. Take the points, but we don't think you'll need them.