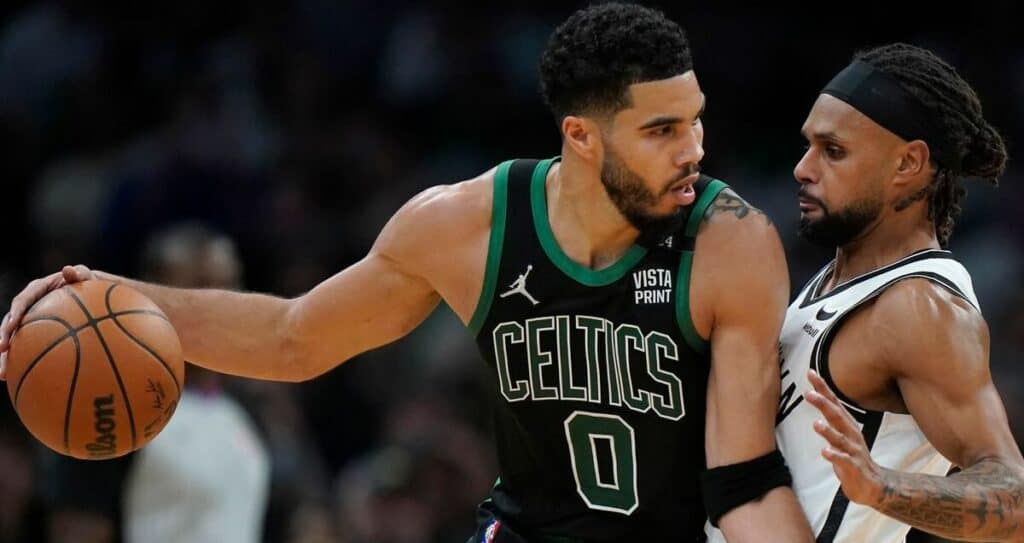 Jayson Tatum will score his fair share of points, but we see him going Under his 3-pointers prop tonight against the Nets.
By Kyle Guenthner on April 23, 2022

The Saturday night portion of the NBA card switches to ESPN, where the Boston Celtics travel to Brooklyn looking to take a commanding three-game lead at 7:30 Eastern Time. Then the Grizzlies are a slight favorite against the Timberwolves in Minnesota at 10:00 Eastern.

With a couple of tight spreads, the NBA night slate is due for excitement. We are currently 9 for our last 13 bets in the NBA. Our team has focused on 3 NBA player props for Saturday Night.

Jayson Tatum is becoming one of the best players and scorers in the league, but 3.5 three-pointers is just too high. Over his last 5 games, Tatum is averaging just 2.6 threes made per game.

He is attempting just six 3-point field goals per contest in the playoffs and we believe the Celtics will attack the paint and not rely on deep shots in tonight’s matchup. We expect the Nets to make it difficult for Tatum to score in Brooklyn and as a result, he will go under his total of 3.5 three-pointers made.

Mills has seen his minutes and production reduced as the season has progressed, but a 4.5-point total is a bit disrespectful for a veteran like Mills. He has averaged only 15 minutes per game in the playoffs, but we believe this should increase tonight, especially if the Nets take a much-needed early lead.

The Nets are back home where Mills scored 10.8 points per game during the regular season. We expect Mills to take advantage of his minutes and put up a few threes in tonight’s matchup with the Celtics as the Nets need a spark from a role player.

A rising star in the NBA, Anthony Edwards has shined in his short playoff career. Edwards has scored 30+ in 3 of his last 6 games, and we believe the younger player is destined for another 30 spot here. He is averaging 10 three-point shot attempts per game so far this series and we believe this will continue tonight.

The Minnesota Timberwolves are desperate for a win after a devastating blown lead in game 3. We expect them to come out hot and the game to hit the over with both teams scoring at will. Look for Edwards to go over his point total at 23.5 in tonight’s late matchup.