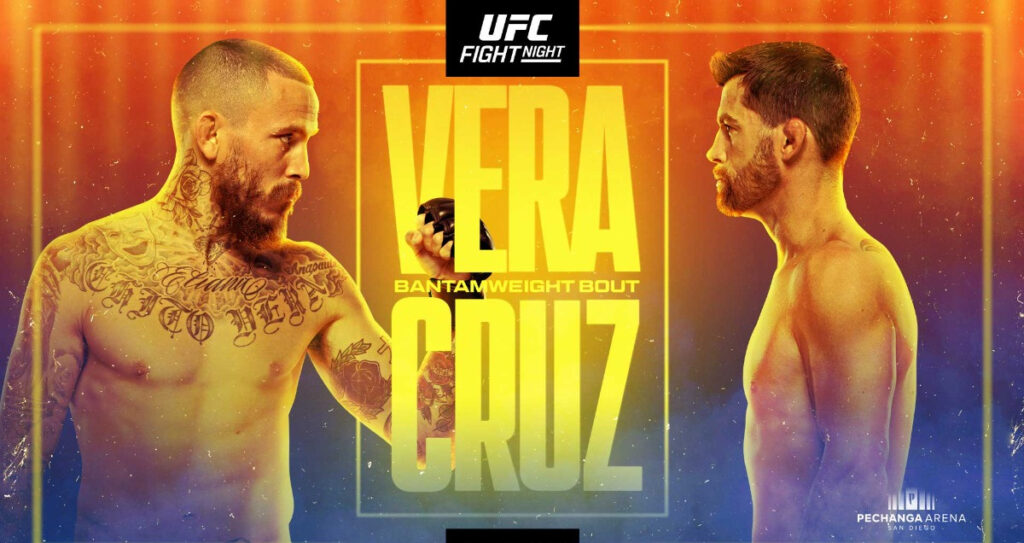 We like Vera to get it done over Cruz as part of a parlay for UFC Fight Night on August 13.
By Bill Christy on August 10, 2022

After some bad news early in the night with Josh Quinlan getting popped yet again for PEDs, we had a decent night. Before getting into our plays that actually went off, we need to address this Quinlan nonsense. Coming off a 9-month suspension for the same thing, Quinlan is likely now done in the UFC before ever really getting started.

We did not pick up the win on Jason Witt who was set to face Quinlan, but the fact that Quinlan tested positive proves what we expected and that was that he would not have been able to naturally handle the vanilla gorilla. Let’s get to our plays that actually went off.

Serghei Spivak was absolutely technical in his victory over Augusto Sakai. He may well be on his way up the rankings and will likely get a top 10 fight next. However, Vicente Luque fell short in closing our parlay.

We underestimated Geoff Neal and paid the price as he put Luque away in the 3rd. That left a sour taste in our mouths as we entered the main event. Early in the 4th round, Jamahal Hill began to look like he was going to close out Santos.

At the 3 min mark he put Santos down and lucky for us, Herb Dean let this one go 1 second longer than it needed to go and allowed us to cash our over 3.5 round play at +200. All in all, it was a profitable night. This weekend we get a fight night card with lesser-known names which inevitably ends up being entertaining.

We see some value on some matchups and will discuss them below. Here are our 3 best bets for UFC Fight Night: Vera vs. Cruz.

Azamat Murzakanov is entering his 3rd fight in the UFC after defeating Matheus Scheffel by KO in the 1st in Dana White’s contender series. He then faced off with Tafon Nchukwi back in March and finished him early in the 3rd with a knee. He is facing a decent fight in Devin Clark, who will be a significant step up from Nchukwi.

Clark is coming off an impressive KO win over William Knight back in April. However, that fight was at heavyweight where Clark looked to be a bit more comfortable. In his previous 2 fights at light heavyweight, Clark lost by decision to Ion Cutelaba and to Anthony Smith via submission.

We are expecting Azamat to continue his undefeated streak in a win over Devin Clark, who is suspect at this weight. Also, we never bet against undefeated Russians.

Vera we like in the main event to get the job done over Dominick Cruz, who has spent more time on the headset calling fights than he has in the octagon in 2022. He is coming off an impressive comeback victory over Pedro Munhoz in December of 2021 where he was dropped twice in round 1 but fought his way to a unanimous decision victory.

At 37, Cruz is a heavy dog here against Chito Vera, who is on a 3-fight win streak. His latest win came over Rob Font in April, who is currently the #4 ranked Bantamweight in the UFC.

This fight is likely to stay standing up where Chito will have the advantage in terms of speed and accuracy. Chito lands over 55% of his significant strikes to Cruz’s sub 40%. This is likely to go to a decision but as always, the parlay takes that out of the equation.

We are going out on a limb here but believe it could pay off. Gabriel Benitez is just 1-4 in his last 5 fights and 3 of those losses came via KO/TKO. Ontiveros has lost his 1st two fights in the UFC.

Benitez has 4 fights left on his contract and will be pressed to get a win here and turn things around. He has a 7-inch reach advantage and Benitez only carries a 50% takedown accuracy which, if he is unsuccessful in getting Charlie on the mat, we could be cashing an almost 3 to 1 dog here.

Onama lost his UFC debut by decision to Mason Jones, who has been hyped up prior to his loss the other week to Ludovit Klein as a heavy favorite. Since that loss, it seemed as if Onama decided he wants to finish fights instead of trying to outlast his opponents.

He KO’d Gabriel Benitez in the 1st and followed that up with a submission victory over Garrett Armfield in the 2nd round. We expect him to jump all Landwehr, who has a 2-2 record in the UFC with both losses coming via KO in the 1st round. We are banking on the idea that he is unable to weather the early storm from Onama in this one.