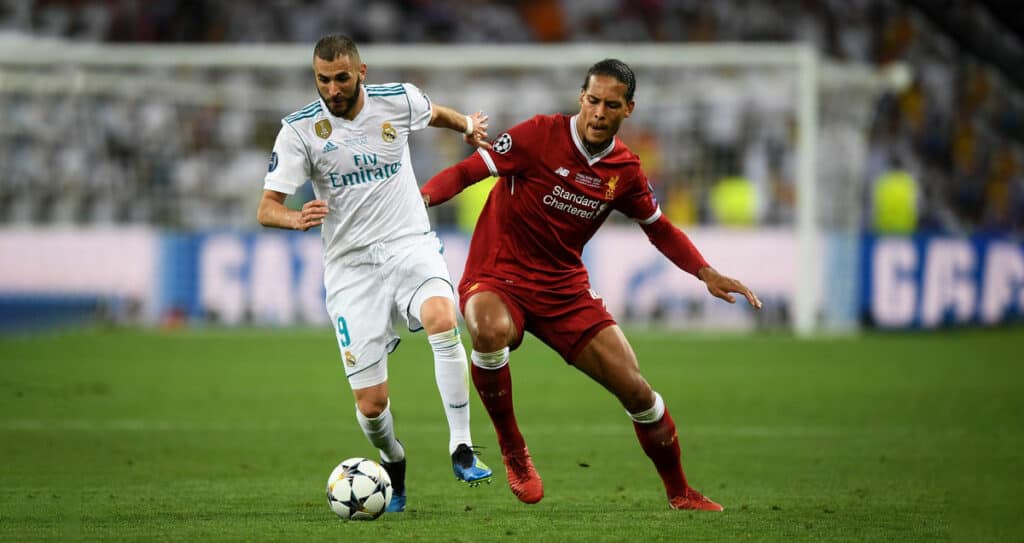 Benzema and Real Madrid are one win away from finishing off an incredible, improbable Champions League run.
By Nicholas Berault on May 28, 2022

Soccer fans around the world are bracing for another exciting conclusion to the UEFA Champions League with global heavyweights Liverpool FC and Real Madrid CF facing off today at 3:00 PM EST. With 19 combined Champions League titles between the two clubs, there are historical implications for the winner as well. Real Madrid would have 14 titles with a win this year, twice as many wins as any other club. Liverpool’s victory would be their 7th Champions League Final triumph, tying them with AC Milan for second most all-time.

How Real Madrid Made the 2022 Champions League Final

Real Madrid have scrapped their way to this year’s final. Striker Karim Benzema leads all players in this season’s competition with 15 goals and 23 shots on target in 11 matches. The Spanish club advanced past Paris St. Germain in the Round of 16 with a 3-2 aggregate victory after losing the first match on French soil. They then scored two goals in the 80th minute or later, including the lone goal in extra time, to advance past Chelsea in the second leg of their quarterfinal matchup and earn a double fixture with Premier League leader Manchester City. Real Madrid miraculously scored goals in the 90th and 91st minutes to force extra time against the Cityzens, again in the second leg, and Benzema gave them a lead they wouldn’t relinquish on a penalty in the 5th minute of extra time.

This tumultuous path has led them to Champions League final against Liverpool, a rematch of their 2020-21 quarterfinal matchup. Real Madrid advanced 3-1 on aggregate last year before falling to eventual champion Chelsea in the semi-finals.

How Liverpool Made the 2022 Champions League Final

Liverpool return to the Champions League final after back to back appearances in 2017-18 and 2018-19. The Reds fell to this year’s final opponent Real Madrid in a 3-1 defeat that capped a run of three straight Champions League titles for Madrid. Liverpool clawed their way back to the final in 2018-19, where they prevailed over fellow English Premier League foe Tottenham Hotspur 2-0. As fate would have it, that final match was played in Madrid.

This year’s Liverpool team has carved up their competition fairly well, and rose to the challenge when Villarreal tied their semi-final matchup 2-2 on aggregate before halftime in the second leg. Liverpool responded with three second half goals in a span of 12 minutes to secure their place in this year’s final. They are led in scoring by Mohamed Salah, with 8 goals to his name this season from 16 shots on target. Both numbers are fourth among all players.

With gameday officially here, we have a much better idea of what the two lineups will look like. Liverpool, running their classic 4-3-3, are expected to line up as seen below for the final:

Real Madrid run a 4-2-3-1 with the majority of their goals coming from Benzema up top and Vinicius Jr. on the left. Here is a look at the projected 11 for Real Madrid:

Liverpool currently sits as a heavy favorite over Real Madrid, and with good reason. They have lost only once in their 32 fixtures in 2022, and that loss (Inter) came on the second leg in the Round of 16 of the Champions League. It was a game they did not need to win in order to advance. The odds for the Champions League Final are tight across the market, with most books listing Liverpool as a -190 to -210 favorite. It is worth noting that this number has actually moved towards Real Madrid over the past two weeks.

Here are the live odds from DraftKings for the 2022 Champions League Final:

With the recent history between these two clubs, this match has a good amount of pride at stake along with both legions of ravenous fans being hungry for another title at the height of global soccer. Real Madrid are 4-0-1 against the Reds in their last five matches with a combined goal margin of 10-2. We like the team that has been more consistent throughout this competition and relied less on last minute heroics to come out on top, especially given they’ve likely heard plenty about their recent struggles against Real Madrid.

Both Mane (+200) and Firmino (+230) have been in great form for Liverpool over the past month. Each have 3 goals in their last 5 games, and Mane scored twice against Crystal Palace on Monday. Mane pays roughly +300 as a SGP with a Liverpool win depending on what sportsbook you use.

It should come as no surprise that Liverpool (2-1) and Liverpool (1-0) are the betting favorites. The Reds have been phenomenal defensively as of late, allowing just 4 goals in their last 8 games. They have also help opponents to 1 goal or less in 8 of their 12 Champions League games.

That being said, we do thing Real Madrid finds a way to score in the Final. They have been shut out just once in Champions League play, and scored 11 goals in 4 games against Chelsea and Manchester City.

The real question is whether or not Liverpool can get to 3 goals to make this a 3-1 final score, which would pay out +1600. The Reds have topped 2 goals just once in their last 7 games overall and Real Madrid held them to just 1 goal over 2 games in the Champions League last season. We think Liverpool 2-1 stands out as the correct score for this finale.