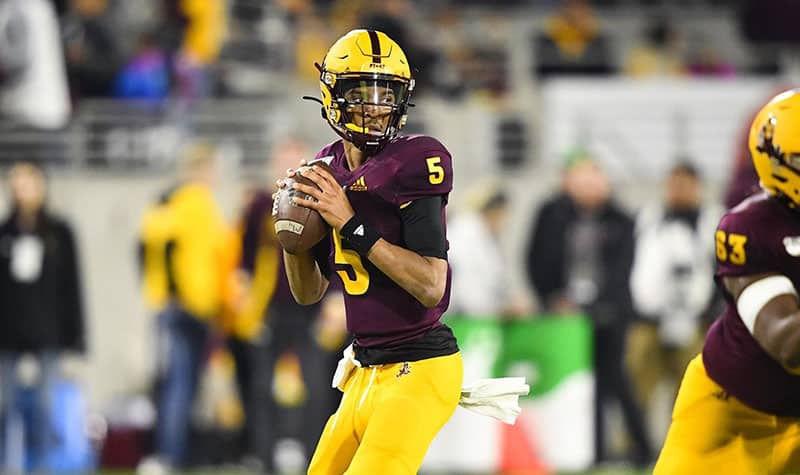 We have been searching for value in the college football futures marketplace. Now it’s time to “go west, young man!” In all of the other FBS Power 5 conferences, there seems to be one heavy favorite in each with the rest of the teams being priced as a middle tier or greater underdogs. However, that is not the case with the PAC 12.

One glance at the odds to win the PAC 12 title tells us that there is no clear-cut favorite. This field is wide open, and that makes it a little more exciting and possibly more valuable for sports bettors. As usual, we will dive into three teams that provide some value to your betting portfolio. To start things off, let’s check the PAC 12 Title odds for each team currently available at DraftKings.

How can we not love a coach like Herm Edwards? If you need a good laugh, look up his video from his NFL days where he says: “Hello! You play to win the game!” Herm knows how to run a football program and has taken this Sun Devils team to new heights of late.

Did you know that Arizona State led the PAC 12 in scoring last season with over 40 points per game? Granted, the sample size was small, as the Sun Devils only got four games in for the 2020 season. Nevertheless, All-World QB Jayden Daniels and his 29 career touchdowns (22 passing, 7 rushing) will be poised for his best season ever in 2021.

Arizona State’s new offensive coordinator Zak Hill has really helped Daniels progress as a downfield passer. Daniels could have a bright NFL future and may even be a better pro prospect than USC’s Kedon Slovis. The offense will boast plenty of speedy weapons at both running back and wide receiver positions.

Tailback Rachaad White showed the college football world that he has what it takes to be a legitimate star in the conference. The 6-2, 195 pounder scored six total touchdowns in only four games last season. Having a dangerous 1-2 punch like White and Chip Trayanum should open up plenty of passing lanes down the field for Daniels to exploit their opponent’s secondary.

The schedule sets up decently for the Sun Devils as well. Their make-it or break-it game is versus USC, but it is at home in Tempe. Arizona State gets a huge break by not having to face Oregon during the regular season in 2021. Given the way their PAC 12 schedule lines up and the explosiveness of this offense, we are loving their current title odds at +450.

Offensive mastermind Chip Kelly finally has the recruits he needs to turn this Bruin program around. Although they are coming off a losing season with a 3-4 record, UCLA played tough in each of their losses and was never blown out. We think this could be the year that Chip gets his boys to turn the corner.

The offense should be ready for a dynamic 2021 season as playmaking QB Dorian Thompson-Robinson returns for his fourth season. This kid has quietly put together a nice college career with 40 touchdown passes and 20 picks. The entire offensive line returns for the Bruins as well (led by juniors Alec Anderson and Sean Rhyan at both starting tackle positions), and that should give Thompson-Robinson more time to throw in 2021.

The Bruins defense has a lot of talent coming back as well in 2021. UCLA will boast an experienced secondary with seniors like Stephan Blaylock and Quentin Lake stepping up to limit their opponents down the field passing attacks. Hopefully, Kelly has recruited some defensive line talent to help replace NFL draft pick Osa Odighizuwa.

The only pause for concern is that UCLA’s schedule may be the toughest in the entire conference. Road trips to Utah, Washington, and archrival USC look brutal. The home slate does not look easier with the likes of Oregon, Arizona State, and a tough non-conference opener against the LSU Tigers. That being said, Chip Kelly finally has the talent here to make a run at a PAC 12 title, and at +1200 odds, we are willing to bet he does. 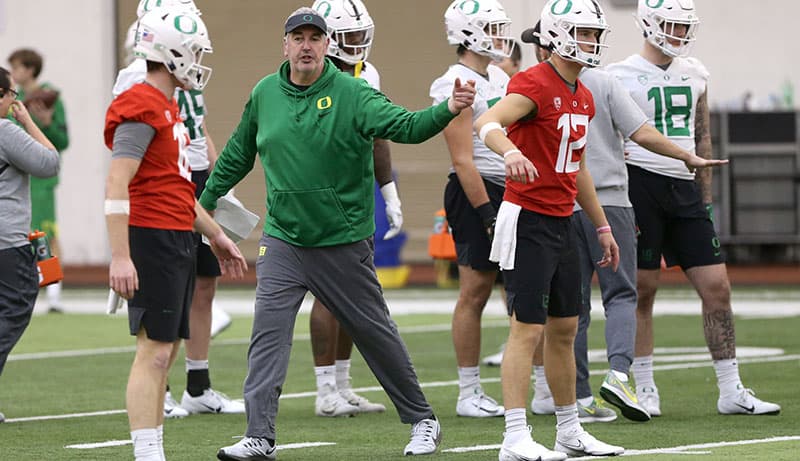 After watching Oregon repeat as PAC 12 champs last year, it would not surprise us in the least to see the Ducks make it three conference titles in a row! Surprisingly, no one seems to know who will be under center for Oregon in 2021 as Tyler Shough (last year’s starter) transferred to Texas Tech in the offseason. Ducks offensive coordinator Joe Moorhead seems the most excited about Anthony Brown, the dual-threat graduate transfer from Boston College.

Brown has NFL level size at 6-2 and nearly 230 pounds. He also has 42 career touchdown passes and 4,902 career passing yards. The majority of the Ducks starting offensive line will return this season, as well as a whole slew of speed demon receivers like Mycah Pittman and Kris Hutson.

The Ducks also have possibly the most exciting defensive player in the country coming back in the way of Kayvon Thibodeaux. NFL scouts are already drooling at Thibodeaux’s amazing pass-rushing ability! Many folks are saying that Thibodeaux could be a top-five NFL draft pick in 2022.

Oregon should not have a problem taking home the PAC 12 North division crown, which means you are getting +300 odds on a moneyline bet in the PAC 12 Title Game. However, the Ducks will face some stiff competition on the road against tough teams like Washington, UCLA, and Utah. Also, don’t forget about the early season marquee matchup against Ohio State, which is also a road test (we can hardly wait for that primetime game!).

We envision Oregon playing Arizona State in the PAC 12 title game in December so holding both teams at plus money on our futures betting card makes plenty of sense. Hopefully, Mario Cristobal will take the governor off of Joe Moorhead and let him call some more aggressive plays in 2021.