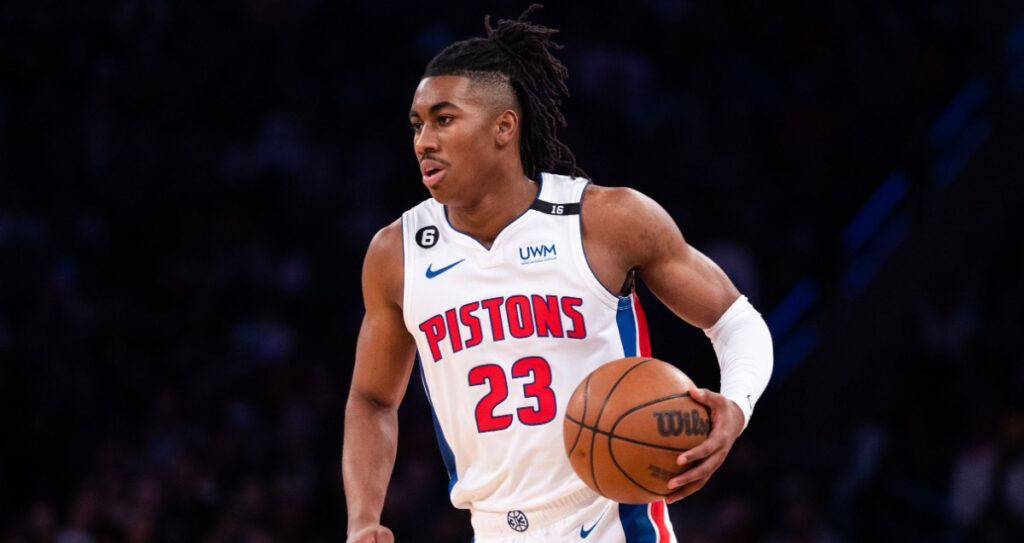 Jaden Ivey is a big part of our 2 pick NBA PrizePicks Power Play on Tuesday!

Tuesday of Thanksgiving week gives us a slate of 4 NBA games to dive into. The TNT doubleheader features the Nets at 76ers and the Lakers at Suns. We weren't able to find any value in either of those games but we still found 2 NBA player props that we think are positive EV.

Our NBA props went 1-2 Friday but they're 14-9 overall this season. Let's get back on track with a 2-pick NBA PrizePicks Power Play for Tuesday, November 22.

This is one of those plays where most of the stats go against our projections. Brooks can shoot the rock but he's only averaging 16.9 points per game for this season and 14.7 for his career. So why in the world are we playing this Over the total?

It all comes down to the injury report for Memphis. The Grizzlies starting lineup has been decimated by injuries of late. Desmond Bane went down a few days ago with a toe injury and will be out for quite a while. To make matters worse, superstar guard Ja Morant has been ruled out of tonight's game with an ankle injury.

With Memphis's two main scoring options on the bench, Brooks will play more minutes and get more shots. We already saw this play out on Sunday, when Brooks lit up the Brooklyn Nets for 31 points. We're expecting more of the same tonight against the Kings so we'll gladly jump on the Over!

We love betting player props Over when a total is this high (231.5). It doesn't hurt that Sacramento only ranks 26th in points per game allowed (117.5). They also only rank 29th in defensive efficiency.

What else screams value with this play? Both FanDuel and PointsBet price this prop a full point higher than PrizePicks. DraftKings and Caesars also heavily juice the Over. Brooks will finish with at least 25 points tonight!

Here's another injury situation that pointed us toward the Over! The Pistons' backcourt has been bitten by the injury bug just like the Grizzlies. Cade Cunningham could miss lots of time with a shin injury and Saddiq Bey will miss tonight's game with a severely sprained ankle.

Because of all of this, Ivey will get more minutes and more scoring opportunities. The rookie from Purdue is having a solid first season. He's averaging 16.8 points, 4.8 rebounds, and 4.1 assists per game so far.

While all of that may only add up to a total of 25.7 points, rebounds, and assists per game, keep in mind that most of those numbers came with both Cunningham and Bey on the floor. Ivey is averaging 31.1 minutes per game but look for that number to exceed the 40 minutes mark tonight against the Nuggets.

Ivey has gone over this PRA number in 3 of his last 5 contests. Denver also ranks a putrid 22nd in fastbreak points allowed and 27th in defensive efficiency. We're expecting a big night from Ivey and for him to easily to Over this PRA amount.

Best of luck with all of your NBA action on Tuesday. Let's find that 2-0 sweep tonight! Thanks for reading.