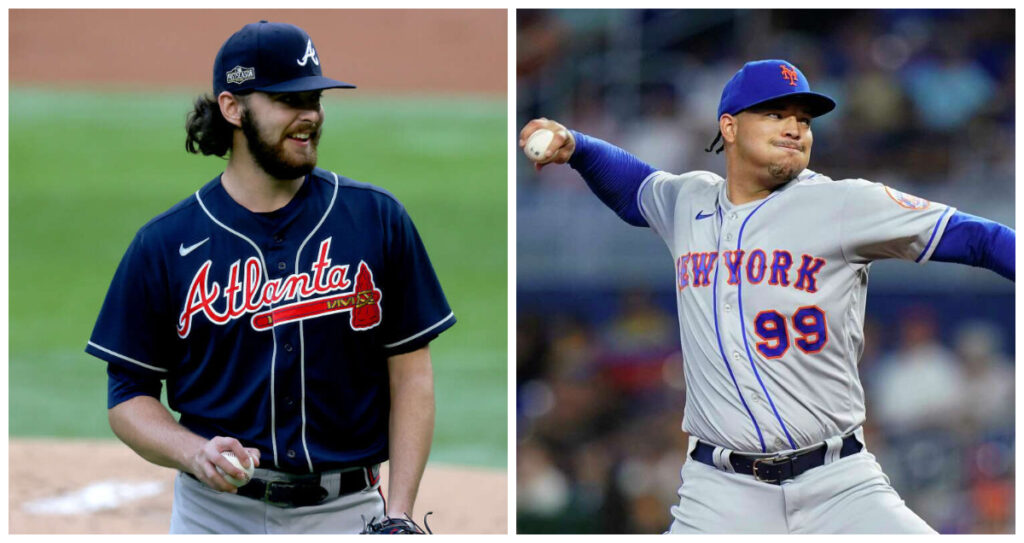 Ian Anderson will take on Taijuan Walker as one of our 2 MLB best bets for Friday.
By Mike Noblin on August 5, 2022

Our MLB best bets continued to struggle on Wednesday with a 1-2 mark. The Dodgers run line cashed for us but both the Braves and Blue Jays let us down. After a sizzling June, our July and early August downturn have pushed the record to 57-43.

Even though we'll never complain with a 57% winning percentage, it's time to right the ship and go on a heater before football season starts. Let's kick the weekend off in style with 2 MLB best bets for Friday, August 5.

I love this Braves team but they've been playing mediocre baseball of late with a 5-5 record over their last ten games. The defending World Series champs have done most of their winning against bad teams, as evidenced by their surprising 14-16 record against Top 10 teams. The offense needs to show some more consistency, especially against the tougher teams.

The Mets have been rocking and rolling all season long and they've won nine of their last ten games. Taijuan Walker has pitched brilliantly this season (9-2, 2.79 ERA) and he should be able to keep this Braves offense at bay, especially since Atlanta ranks near the bottom of the league in strikeouts. We also like that Walker is 2-0 over his last three starts with a 3.57 ERA.

Ian Anderson hasn't pitched too bad for Atlanta this year but he's been walking way too many guys (1.50 WHIP). You can't do that too often against a lineup that has guys like Pete Alonso and Francisco Lindor ready to make you pay. We like the Mets to get it done at home tonight over the Braves.

Toronto burned us on Wednesday against Tampa Bay but we are still expecting a giant second half from this team. The Blue Jays lineup is way too stacked to keep hitting so poorly with runners in scoring position. A 9-3 win over Minnesota yesterday proves that Toronto may be poised to break out in a big way.

The Jays have the best batting average in baseball at .265 and they average almost 5 runs per game. They should be able to feast off a so-so guy like Tyler Mahle, who was 5-7 with a 4.40 ERA with the Reds before coming over to the Twins in a trade. Not many of Toronto's hitters have faced Mahle but newcomer Whit Merrifield is hitting .667 with an RBI in limited action against him.

Jose Berrios hasn't had his best stuff this season, which does concern us a bit in this spot. Nevertheless, the veteran right-hander is still 8-4 on the season and has looked more like his old dominant self of late. Berrios is 1-0 with a 1.11 WHIP and a 2.84 ERA over his last three starts.

We expect the Blue Jays to build on yesterday's massive offensive performance. Let's lay the small number with Toronto in this one. Best of luck with all your MLB action this weekend!