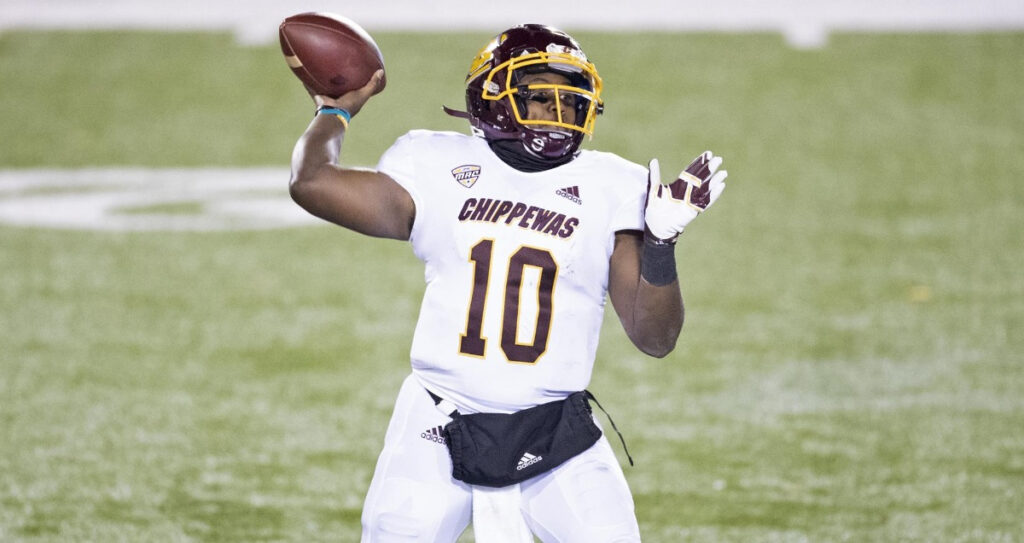 Daniel Richardson has played well so far this season but we're laying the points with Northern Illinois as one of our college football best bets for Wednesday.

Fresh off our MACtion on Tuesday night, we get even more MACtion on Wednesday night on the college gridiron. None of these 4 teams are over .500 but there is plenty of information that we believe will give us an edge.

Once again, we have a play on the spread for both of these MAC tilts and look to continue profiting. Isn't a great to have football on TV every single night?

The Chippewas are just 2-6 on the season and are coming off one of the worst losses of the season. Bowling Green came into Mount Pleasant and walked away with a 34-18 win. CMU trailed by just 7 heading into the 4th but the Falcons tacked on 17 to CMU’s 8.

Turnovers told the story in this one as the Chippewas coughed it up 4 times while Bowling Green had none. Daniel Richardson has been the motor that makes this team run and has done a decent job. He has thrown 14 touchdowns to just 4 interceptions while averaging close to 250 yards per game.

Northern Illinois is also just 2-6 on the season and also coming off a loss. The Huskies were sent home with their tail between their legs after losing 24-17 in Ohio. Previous to the Ohio game, the Huskies had beaten Eastern Michigan to snap a 5-game losing streak.

In this Ohio loss, the Huskies were efficient on the ground where they picked up 267 yards but the passing game was almost non-existent and finished with just 110 yards. UNI is 65th in the country on 3rd down conversions with a 44.8% conversion rate.

The Huskies should be able to control things with their strong rushing attack in this matchup. Harrison Waylee and Antario Brown are leading the rushing attack averaging a combined 162 yards per game.

CMU is near the bottom of the country in 3rd down conversion rate and this will be a problem for them once again in this matchup. Huskies win this one in Huskie Stadium in a comfortable fashion. Lay the points!

The Broncos are off to a mediocre start at 3-5 through their 1st 8 games this year. They avoided a 3-game losing streak last week by knocking off Miami Ohio on the road 16-10.

Oddly enough Miami scored in the 1st and 4th quarters while laying a goose egg in quarters 3 and 4, while the Broncos did the exact opposite. They held Miami to just 83 yards on the ground and 2 of 13 on 3rd down. The Broncos ran for over 180 yards and went 10 of 21 on 3rd down chances.

Bowling Green actually has the best record among the 4 teams playing on this slate at 4-4. They have won 3 of their last 4 games and have back-to-back wins over Miami Ohio and Central Michigan.

Their latest win over CMU came down to turnovers. The 4 that they forced last week are the most they have forced all year.

The issue for the Falcons all year has been their defense. They are allowing over 34 points per game which ranks them 237th in the nation.

We believe this game is going to come down to the final possession and if that is the case, we want those points in our back pocket. Bowling Green’s inability to hold opposing offenses in check will likely get them in trouble once again here.

WMU continues their trend of covering in this matchup as they will look to make it 6 of the last 8 against the spread. In what could be a field goal game either way, we'll gladly take the dog!