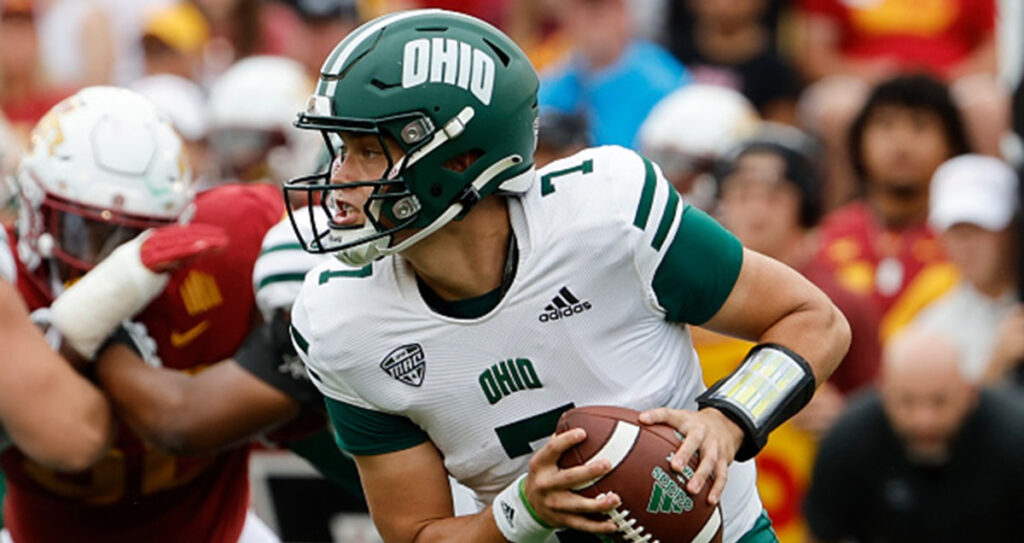 Kurtis Rourke is the main reason we like Ohio to upset Buffalo on Tuesday night MACtion!

It’s Tuesday night and we have football. That can mean only 1 thing and that is that we have some MACtion! Back in the day, we used to get something called interactive Tuesdays with MAC conference matchups and it was a joy for any college football bettor.

This week we have 2 matchups on the slate with both starting around the same times at 7 and 7:30 pm EST. We have a play for the side of each of these games and look to make the 1st Tuesday night MACtion a profitable one.

Ball State currently sits at .500 on the season and is coming off a loss to Eastern Michigan which snapped a 3 game win streak for them. In that game against Eastern Michigan, the Cardinals led after 3 quarters, 16-10.

Unfortunately, they were shutout in the 4th while Eastern Michigan tacked on 10 points to win the game. Ball State turned the ball over 3 times and seemingly could not stop EMU from picking up 3rd down conversions. They will need to be improved in both of those aspects against Kent State if they plan on upending them on the road tonight.

Kent State picked up just their 3rd victory of the season last week over Akron 33-27. Losses on the road to Miami Ohio and Toledo had dropped them to just 2-5 prior to the Akron game.

The Golden Flashes were dominant on the ground as they rushed for over 240 yards led by Marquez Cooper’s 137. Devontez Walker snagged a pair of touchdown passes from Devin Kargman in the victory.

The total sits a bit over 60 points which indicates a higher-scoring game. That should favor the Golden Flashes as they average more points per game and are a much more proficient offense than Ball State.

The Cardinals had trouble last week stopping EMU from converting on 3rd down and that will likely be the case again against Kent State who is 51st in the country with a 46.8% 3rd down conversion rate.

The Bulls are 5-3 on the season now after starting the season 0-3. The conference schedule could not have started soon enough for Buffalo as they rattled off 5 straight wins in conference play and look to be one of the best teams in the MAC.

After holding Bowling Green and UMass to just 7 points a piece in their road victories, the Bulls played a higher-scoring affair against Toledo last week and came out victorious 34-27. They trailed 27-10 heading into the 4th before Cole Snyder took over the game.

He ran one in and then tossed one to Jamari Gassett before Ron Cook took one 30 yards to the house to take the lead. The Bulls finished it off with an Alex McNulty 42-yard field goal to seal the deal. They forced 6 Toledo turnovers in the victory and will look to keep that trend going against Ohio.

Ohio is in the midst of a 3-game win streak after defeating Northern Illinois last week 24-17. They had previously beaten Akron and Western Michigan where they combined to score 88 points.

Ohio took a 10-6 lead into the break before Northern Illinois tied things at the end of the 3rd. Kurtis Rourke hit Sam Wiglusz for a 22-yard touchdown pass midway through the 4th, which ultimately became the game-winning score. Justin Lynch failed to convert on 4th down on back-to-back drives for Northern Illinois in the end.

We believe Ohio is being underestimated in this matchup. Yes, Buffalo has been rolling in their last 5 games but Ohio is no slouch. They are 23rd in the country in passing offense with 308.5 yards per game through the air.

Kurtis Rourke has thrown 11 touchdowns and just 1 interception in his last 5 games. Ohio needs to jump on Buffalo early and force the Bulls to throw the ball more than run where they are not comfortable offensively. Ohio covers and likely pulls off the home upset here.