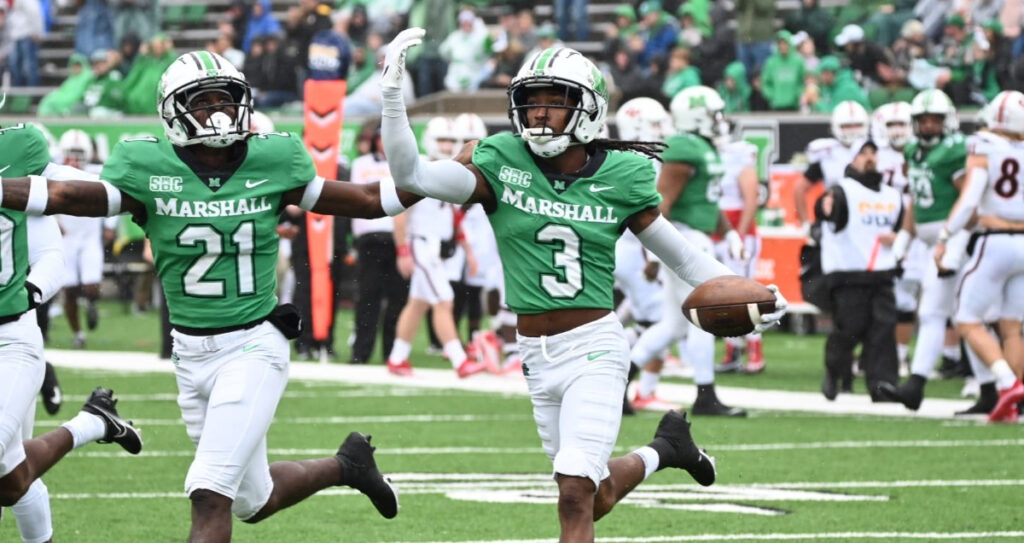 We expect E.J. Jackson and Steven Gilmore to lead Marshall to victory on Wednesday night.

After a successful Wednesday evening of CFB action last week, we couldn’t wait for this week’s matchup on Wednesday night. We hit both plays last week with the Golden Knights of UFC putting on an absolute clinic at home against SMU in the 2nd half.

Trailing 13-10 at the half, UCF outscored SMU 31-6 in the 2nd half en route to a 41-19 victory. The best part about the defensive performance of UCF in the 2nd half was that it kept the total under 65 which was our 2nd piece.

This week we get a Sun Belt Conference vs Conference USA matchup between the Ragin’ Cajuns of Louisiana at the Marshall Thundering Herd. Louisiana won last season 36-21 in their matchup in the New Orleans Bowl. Marshall will be looking for revenge at home Wednesday.

Louisiana won their 1st two games of the season, which included a 42-21 win over now 4-2 Eastern Michigan. After that win, they dropped 3 straight including their latest one to South Alabama 20-17.

That last loss was not terrible as South Alabama was favored by 8.5-points. It has been their defense that has kept them competitive early this year. They are allowing just 20.4 points per game which places them 66th in the country.

Marshall is 3-2 on the year and has their biggest win of recent history in their pocket when they defeated then #8 Notre Dame 26-21 back in early September. After that monumental win, the Herd lost 2 straight to Bowling Green and then Troy.

They finally got right 2 weeks ago by defeating Gardner-Webb 28-7 at home. They were off last week and have been prepping for this game. They are 28th in the country in rushing yards with 224.4 yards per game.

Marshall has a couple of motivating factors ahead of this matchup with Louisiana. They want revenge for their Bowl Game loss last season and also to prove to everyone that the Notre Dame win was not just a fluke.

They want to be sure that they finish strong with 8 or more wins on the season. The Ragin’ Cajuns are not going to be able to contain the running of Khalan Laborn, who is averaging 146 yards and has 8 touchdowns on the year.

We believe Marshall is going to control this game on the ground and ride Laborn to victory. Both teams have healthy defenses so there shouldn't be a ton of scoring from either squad.

We started off by mentioning the Louisiana defense and what they allowed in points per game. This Marshall defense is even tougher. They are allowing just 16.2 points per game and are 28th in the country. This one should stay low.