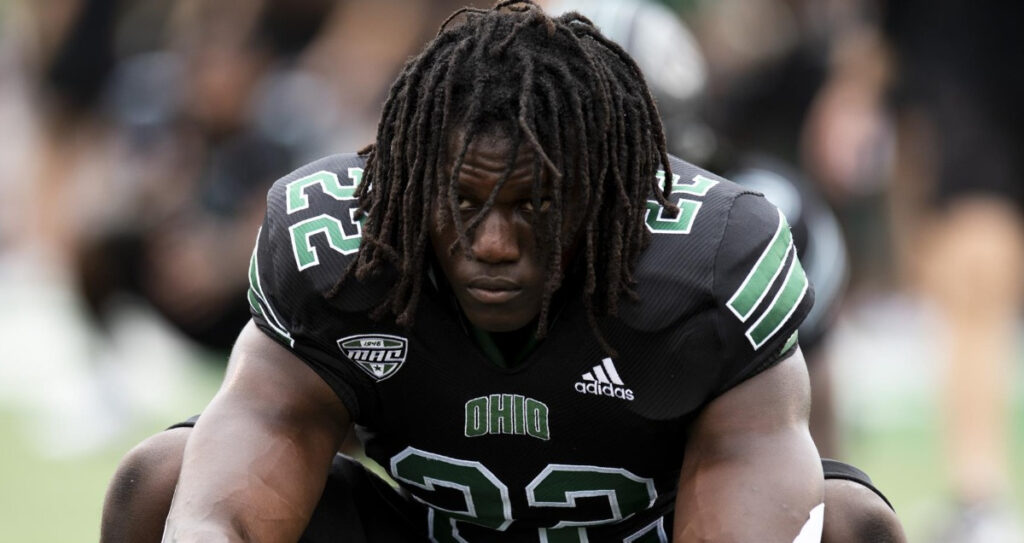 Sieh Bangura is a big reason why we like Ohio to cover the spread against Bowling Green on Tuesday.

College football lovers get 2 MAC games to sink their teeth into on Tuesday, November 22. Both games will kick off at 7 PM Eastern Time. Ball State has a road trip to Miami-Ohio on ESPN Plus and Ohio welcomes Bowling Green on ESPNU.

The Ball State at Miami-Ohio game is of particular interest because both teams are 5-6 and in need of a win for bowl eligibility. As for the Bowling Green at Ohio game, everyone is wondering if the Falcons can pull off a massive upset in back-to-back weeks.

Both home teams are listed as favorites but, as we all know, MACtion tends to favor the underdogs. Take a look at our 2 best bets and start winning BIG! Good luck!

Ball State is looking to avoid ending their season on a 3-game losing streak this week. They lost at Toledo 28-21 2 weeks ago and dropped one at home last week to Ohio 32-18.

In their matchup with Ohio, the Cardinals were held under 100 yards rushing and turned the ball over 3 times. Going 3 of 12 on third-down conversions didn’t help the cause either. Defensively, Ball State allowed Ohio to gash them for 224 yards on the ground which led to a large discrepancy in total yardage.

Miami Ohio sits at 5-6 just like their opponent Ball State heading into this final game of the regular season. They are coming off a 29-23 win on the road in Northern Illinois last week.

After trailing 10-2 at the end of the 1st quarter, they rattled off 14 unanswered points heading into the half to lead 16-10 at the break. Aveon Smith led the team in rushing with 105 yards on 20 carries and 2 scores.

This game should be a lower-scoring tight game throughout. Neither team is in the top 100 in the country in any offensive statistical category. That being said, MACtion is nothing if not unpredictable.

The fact that Ball State has lost 3 of their last 4 leads us to believe that Miami will be able to take advantage of the final game being on their home turf.

The Redhawks have had success in the past against Ball State when playing at home and we believe this will be the case once again. Lay the small number.

Bowling Green is looking to finish their season above .500 as they currently sit at 6-5 on the year. They have won 4 of their last 5 games with their most recent game being a 42-35 road win over Toledo.

They used a 14-0 1st quarter to lead them to this victory. Matt McDonald threw for almost 500 yards and 4 touchdowns. Odieu Hiliare was his top target grabbing 8 balls for 246 yards and 2 scores.

Ohio is on a 6-game winning streak and would like nothing more than to make that 7 and have a chance at a solid bowl bid. While the passing game has been their bread and butter on the season, they used the run attack in their win over Ball State as they went for 224 yards on the ground. Sieh Bangura was the main man going for 148 yards and 2 scores on 23 carries.

Ohio is one of the hottest teams in the country and has shown they can attack defenses in multiple ways. Kurtis Rourke is listed as questionable but we expect him to give it a go tonight for the Bobcats.

Their passing offense is 20th in the nation averaging over 300 yards per game and they face a Bowling Green team that struggles a bit to consistently move the ball down the field. The Falcons won't be able to keep up.

We believe the Bobcats are going to end the regular season with a statement as they look to get a bowl bid that will be a potential program changer.