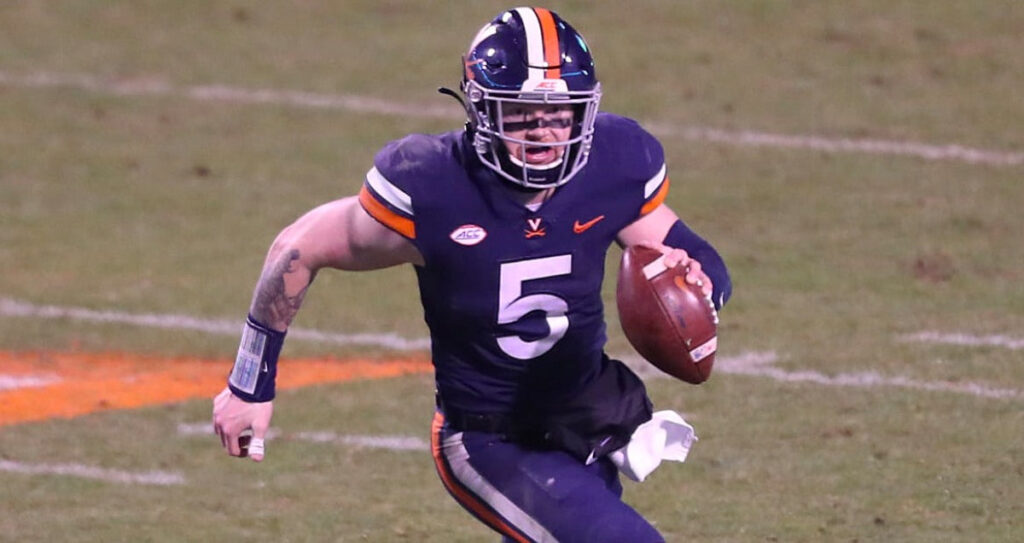 We think Brennan Armstrong should power Virginia to an upset over Georgia Tech on Thursday night!

What a Thursday night we had last week! I am sure many were nervous with the UCF -23.5 play when Temple jumped to a 10-7 lead in the 1st and trailed by just 1 midway through the 2nd. However, that was the last time the Temple team was going to score.

While they failed to score the rest of the way, UCF put up 56 unanswered points on their way to a runaway 70-13 victory. Our 2nd play got a little sketchy at the end as West Virginia trialed 37-31 early in the 4th. Luckily with the game tied 40-40, Casey Legg drilled a 22-yard field goal to win the game for the Mountaineers and give us a clean sweep on the night.

This Thursday we have another 2-game slate and will have a look at each one. We look to duplicate our effort from last Thursday and hopefully score another 2-win night with our 2 college football best bets for Thursday, October 20.

Troy started off 1-2 with losses on the road to #21 Ole Miss and Appalachian State. Since that start, the Trojans have rattled off 4 straight wins over opponents that have a combined .500 record.

Troy’s success has mainly come in the form of their passing game. They are averaging 312 yards per game through the air which is 24th in the nation. However, they have thrown 9 interceptions to just 12 touchdowns.

South Alabama had one of the best runs to start this season of all teams in the Sun Belt. They are 5-1 with their lone loss coming to now 6-0 #11 in the country, UCLA on the road.

They led the Bruins 31-23 going into the 4th before losing 31-32 on a UCLA last-second field goal. The Jaguars are averaging 36 points per game which is 47th in the nation.

With all the talk being about how great South Alabama has been, we are weary of the line being so low. On paper, you would expect this Jaguars team to be at least a touchdown favorite here at home but curiously they're just field goal favorites.

These schools are only 170 miles apart, so it'll be a dogfight! We believe Troy will be able to throw the ball enough to keep this game close and even pull off the potential road upset.

It has gone from bad to worse for this Virginia team this season. They were dropped by Illinois on the road 24-3 in week 2 to bring them to 1-1 before they survived a scare against Old Dominion 16-14.

In the next 3 games, the Cavaliers lost 3 straight games to Syracuse, Duke, and Louisville. Those last losses came by an average of 13 points. Brennan Armstrong has been a shell of himself this season and has thrown 2 more interceptions than touchdown passes.

Georgia Tech is just 3-3 on the year but the Jackets have played a strong schedule. They lost to #4 Clemson, #20 Ole Miss, and 5-1 UCF. They are coming off winning back-to-back games.

They won on the road to #24 Pitt and they then followed that up with a 23-20 win at home over Duke. In those last 2 wins, they forced 4 turnovers while not committing any of their own.

This line is much like the Troy/South Bama game and seems very fishy. Virginia has continually underperformed this season and Georgia Tech has looked solid their last 2 times out.

They are coming off a bye and should be uber-prepared for this game. However, the line is indicating that Virginia is going to be taken too lightly and will steal this one on the road.