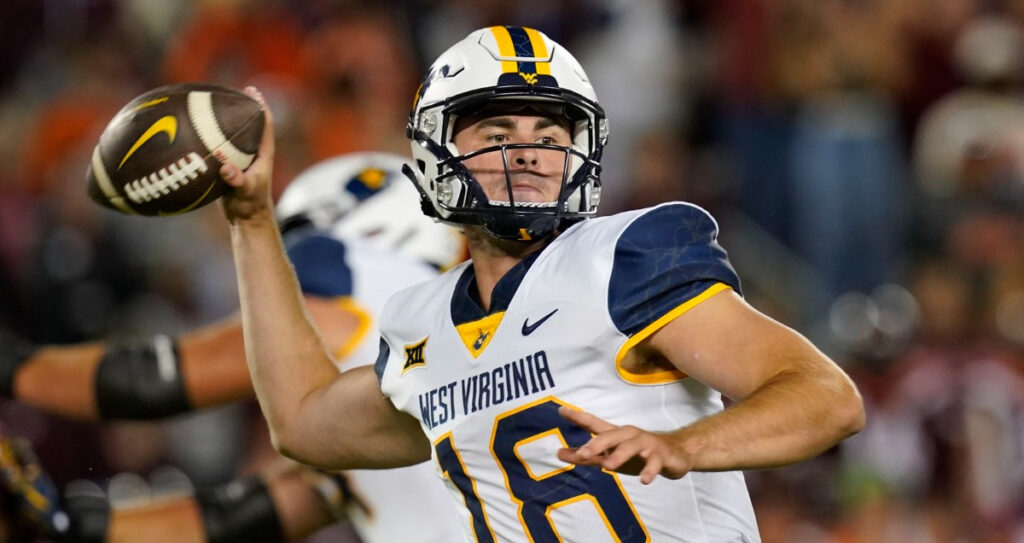 We think JT Daniels and the West Virginia Mountaineers can pull off the upset over the Baylor Bears on Thursday.

We had no action on the college gridiron last Thursday, but this week we have a couple of games to dive into. A matchup in the American Athletic Conference and another one in the Big 12. Both will kick off at 7 pm EST.

We will be giving out a play in both games on the spread that we believe will set us up nicely for the Friday action and upcoming full Saturday slate as well. Here are 2 college football best bets for Thursday, October 13.

Temple is 2-3 on the year trading wins for losses in all 5 games. They are 2-1 at home while going 0-2 on the road. The Owls have been outscored by a combined 54-3 in those 2 road games to both Duke and Memphis.

Temple actually led 3-0 at the half against Memphis last week before being completely dominated in the 2nd half. They have been allowing an average of just 16.8 points per game but have only scored an average of 15 points per game which is near the very bottom of the nation. The offense just can not seem to find their footing this year as they are actually ranked lower in yardage than points.

UCF is 4-1 on the season and coming off an impressive 41-19 victory over the visiting SMU Mustangs. Their only loss came at home to Louisville in the 2nd game of the season. It was the only game this season that the offense was actually held in check.

Plumlee hit the deck 4 times in that game and the offense only mustered 14 points which all came in the 1st half. They are 8th in the country in rushing yards per game and are averaging over 35 points per game.

Temple has been absolutely anemic on offense all year and this UCF team is holding teams to just under 15 points per game. The Owls will be lucky to score more than 7 in this one and the Knights' rushing attack should be able to beat up the Owls throughout the game. We expect this game to be in the bag before the 4th but if it is not, it will likely take one run to break to finish this one off.

Baylor has 2 losses on the season. Both of which were not bad losses. They dropped the 1st to BYU on the road when the Cougars were 21st in the nation and most recently they lost at home to #9 Oklahoma State 36-25.

The Bears do have a decent road win over Iowa State a couple of weeks ago but their wins over Texas State and Albany are nothing to write home about. The 37.4 points per game they are averaging is 41st in the country and holding teams to just over 20 points per game.

They most recently lost at the surging Texas Longhorns 38-20. The offense hasn’t been much of an issue as they are putting up the 34th most points per game in the country.

Morgantown is going to be rocking on Thursday night and will give the Mountaineers some much-needed adrenaline to start this one. Over the last couple of seasons, the home-field advantage has been huge for West Virginia and we believe it will show its worth again here.

We believe West Virginia will use their ability to extend drives (27th in 3rd down %) to frustrate the Baylor defense and ultimately lead them to victory at home. We like the Mountaineers to win outright but will take the +3.5 for some nice insurance.