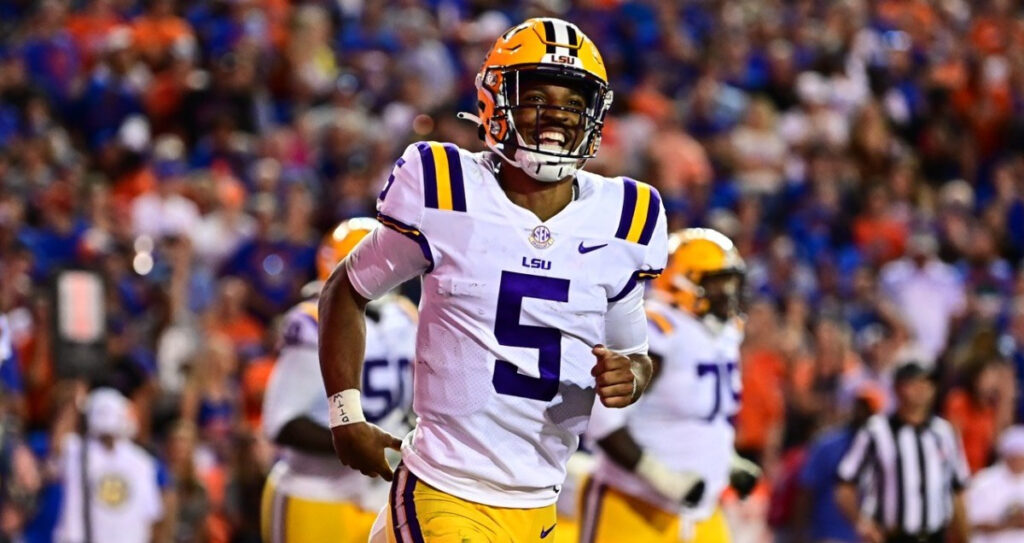 Jayden Daniels is dealing with a hurt ankle but we expect him to play and for LSU to cover the large spread against Georgia on Saturday.

It's Championship Week, where some of the most prestigious conference titles will be decided. For Saturday's batch of games, we'll put our focus on the SEC and Big Ten Championships. Can either of the big underdogs pull off an unlikely upset?

LSU will take on Georgia at Mercedes-Benz Stadium in Atlanta for the SEC title. Purdue will try to slow down Michigan's potent rushing attack at Lucas Oil Stadium in Indianapolis for the Big Ten crown. Here are 2 college football best bets for Saturday, December 3.

LSU enters the SEC championship game on the heels of a 28-23 loss on the road to Texas A&M in their regular season finale. That loss snapped a 5-game win streak that they were riding, which included wins over then #7 Mississippi and #6 Alabama.

Their only 2 other losses came to the then #8 Tennessee in early October and in their season opener against Florida State. The Tigers could not stop the Aggies' rushing attack last week as they went for 274 yards on the ground. Devon Achane led the way with 215 yards on 38 carries.

Georgia completed their perfect regular season last week when they defeated Georgia Tech 37-14 to get to 12-0. That said, they have only beaten 2 ranked opponents.

Their season opener was 49-3 over then #11 Oregon and then home against then #1 Tennessee 27-13. While their offense has been solid, the Georgia defense has been 2nd in the country allowing just 11.33 points per game.

As much as it pains us to ever bet on a Brian Kelly team, we feel that this is the only play in this matchup. We believe the Aggies caught them off-guard last week and Kelly will have the Tigers prepped better for this matchup.

The Bulldogs are averaging over 200 yards per game on the ground but last week was a wake-up call for the Tigers, who will keep this one within 2 scores. Though we're a little bit worried about the ankle of Jayden Daniels, we do expect him to play and have enough success to keep this game close.

We also think that LSU's stud linebacker Harold Perkins can force Stetson Bennett into a turnover or two in this one. The Dawgs will win but the Tigers will get the money. Take the points!

Purdue enters the Big 10 title game on a 3-game winning streak. After losing on the road to Wisconsin they then lost at home to Iowa 24-3. At 8-4 on the year, the Boilermakers faced just 2 ranked opponents and defeated them both.

Both of those games were on the road to conference opponents. In their latest win, a 30-16 game at Indiana, it seemed like a miracle that they won when looking at the statistics. They were beaten in every statistical category except in passing yards and that wasn’t far off.

Michigan did what was believed to be the unthinkable during the Harbaugh tenure. They defeated Ohio State on the road to pick up back-to-back wins over them in consecutive years.

The #2 Wolverines are 12-0 and besides OSU, Penn State was their only other ranked opponent who they defeated 41-17 when PSU was #10. JJ McCarthy showed up big against OSU as Blake Corum and his 121.9 yards per game on the ground watched from the sidelines. McCarthy went for 263 yards and 3 touchdowns while remaining interception-less for the 5th straight game.

This has all the makings of a letdown spot for the Wolverines. After beating PSU, they faced MSU at home and let them hang around for 3 quarters before finally putting them away in the 4th to win 29-7.

Aidan O’Connell should be able to keep the Boilermakers in this one. He is averaging almost 300 yards per game through the air and has 22 touchdown passes. He has enough arm strength to make this Buckeyes secondary a little nervous.

Don’t be surprised if Michigan sleepwalks through the 1st quarter and maybe the 1st half before putting them away late like they did against MSU. The Boilers will cover this one rather easily. Take the points!