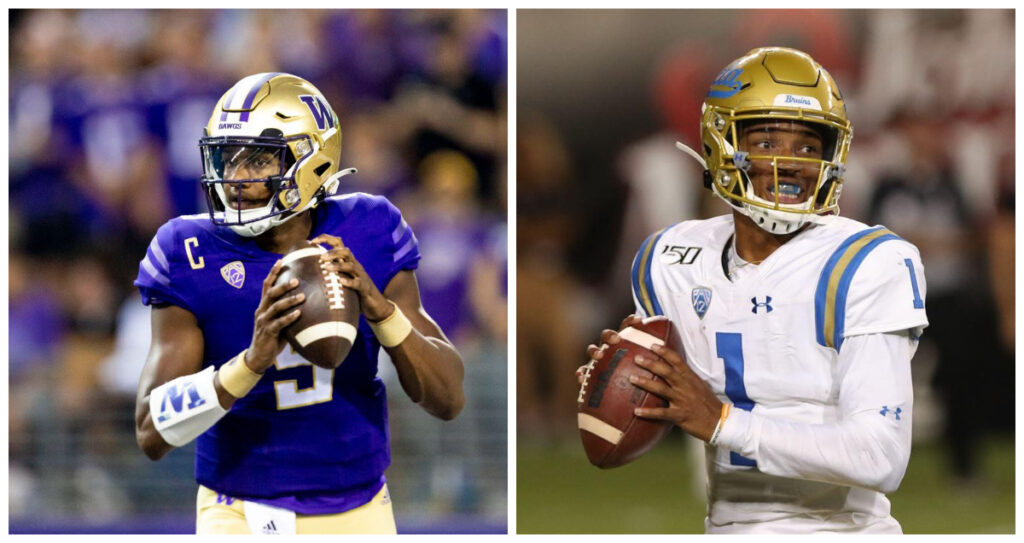 Michael Penix Jr. faces off against Dorian Thompson-Robinson in what should be a fantastic PAC 12 game on Friday night.

Friday was much more kind to us than Thursday. We lost our play on the Broncos of Boise State as 16-point favorites losing outright by 17. However, our Virginia play getting 10 points came through as they lost their lead in the final minute on a Syracuse field goal that gave the Orange a 2-point victory.

This Friday we have a solid 5-game slate to choose from. Boise State is back in the mix as they host San Diego State. A battle of undefeated teams from the Pac-12 will highlight the slate.

The 4-0 and #15 ranked Washington Huskies are a field goal favorite over the hosting 4-0 UCLA Bruins. New Mexico heads to UNLV for the latest start at 11 pm EST where the Rebels are the only double-digit favorites on the slate.

The Green Wave is fresh off their 1st loss of the season last week. After starting out 3-0, Tulane dropped one at home to Southern Mississippi 27-24. They've found their success through their run game and their ability to hold teams to low-scoring totals.

The Green Wave is currently ranked 84th in the country in rushing yards per game with 179.8. They have been holding opponents to just 11.75 points per game which is 14th best in the country.

Michael Pratt has been leading the way for the offense with his arm and legs. His QBR is up to 160.5 and he has 7 touchdown passes to just 3 interceptions. On the ground, Pratt has racked up just short of 200 yards and has added another touchdown there.

Houston has been up and down early this season. They opened up with a close win 37-35 on the road at UTEP. They then picked up back-to-back losses to Texas Tech and Kansas.

Last week, the Cougars righted the ship by grabbing a 34-27 home win over visiting Rice. The MO for Dana Holgorsen’s Cougars has always been their strong scoring offense but they've always lacked a decent defense.

The story remains the same through 4 games this season as they are allowing 35.75 points per game while scoring 32.8 per game. They are 229th in the country in points allowed and will need to slow offenses down if they wish to be bowl eligible this season.

This Tulane team can put up points and will have little pushback from a below-average Cougars defense on Friday. Not only does Tulane have the ability to score, but their defense is also strong enough to keep Houston in check. That will pay off with some stops, which will be putting Houston in spots they haven’t been in much this season.

Key Trends for Tulane at Houston

Washington is quickly becoming the darling of the Pac-12. They are 4-0 and have a signature win over Michigan State in Week 2. Michael Penix Jr. has found a new home after transferring from Indiana and is leading the Huskies to a top 25 scoring offense.

Washington is averaging 44 points per game and holding opponents to just 19. Penix Jr. has been just flat-out phenomenal. He has 12 touchdown passes to just 1 interception and has weapons that he can hit with a deep shot at any time.

UCLA is also 4-0 on the season but is lacking a signature win. However, this week is their chance to make a real statement. They are similar to Washington on both sides of the ball.

The Bruins are averaging 41.8 points per game and have held opponents to just 18. However, it has been the run game that has generated the most yardage for the offense. Their 220.5 yards per game ranks them 31st in the country in rushing attacks.

UCLA will need to contain Michael Penix Jr. in this one. The best way to do that is going to be by controlling the ball and keeping him and the Washington offense off the field.

We expect the Michigan transfer, Zach Charbonnet to continue his 6.8 yards per carry average in this one. Keegan Jones adds another threat on the ground and quarterback Dorian Thompson-Robinson adds another level to the run game as he can make things happen with his feet.

Key Trends for Tulane at Houston