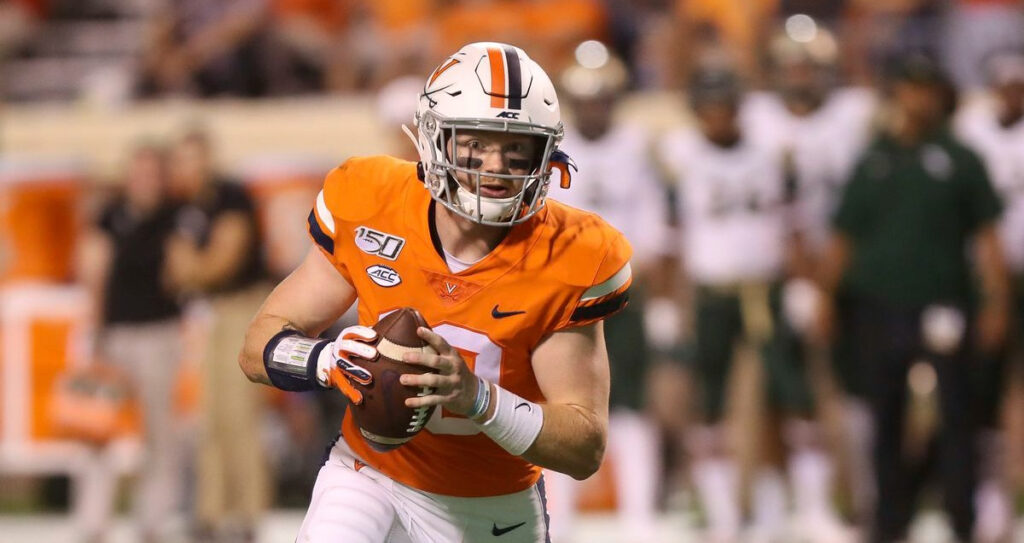 We like Brennan Armstrong and Virginia to cover the big number against Syracuse on Friday night.

We had a Friday night to forget last week. Our favorite play, the Louisville Cardinals against FSU, looked solid at times. They took a touchdown lead to start the 4th quarter.

Unfortunately, Tate Rodemaker, who came in after Jordan Travis got knocked out of the game, connected with Johnny Wilson twice to take a 35-31 lead that ultimately ended up being enough as Malik Cunningham threw a final interception to end the game. As for our other play, the Falcons just did not show up as they lost outright 17-14 as 16-point favorites.

This Friday, Air Force is back on the slate as they host Nevada. Virginia goes to Syracuse and UTEP is hosting Boise State on this 3-game Friday night slate.

The public is backing one of these favorites at a crazy clip of 75% of the bets and over 90% of the money. We will have a play in that game and one other one as we see value on 2 of these 3 games this Friday.

The Broncos are off to a 2-1 start on the season. They have picked up back-to-back wins over Tennessee-Martin at home and at New Mexico the week previous. These wins came after their season-opening loss at Oregon State 34-17.

Boise has gone on to outscore their last 2 opponents 61-21. They have continued to struggle on 3rd downs, converting on just 36.4% of them this season.

George Holani, the starting running back for the Broncos, has done a bit of everything on offense. He has 2 touchdowns on 11 receptions and has accumulated 186 yards on the ground.

Hank Bachmeier has bounced back nicely after an ugly outing against Oregon State. He has connected on 5 touchdown passes and just 1 interception in his last 2.

UTEP has struggled out of the gate. At 1-3, their lone win came at home against 0-4 New Mexico State 20-13. Their other home game was their opener against North Texas that they dropped 31-13.

They are 237th in the country, scoring just 14 points per game. They will need to put up more than 2 scores if they wish to hang with a Broncos offense that has seemingly found its stride.

Boise held both New Mexico and Tenn-Martin well below their scoring averages for the season. With UTEP only averaging 14 per game on the year, there could be a shutout pitched by this Broncos defense. Offensively, they will be fine against this UTEP team that allowed New Mexico to put up 27 against them.

The Cavaliers have gone 2-1 through their 1st three games of the season. Their latest game was a 16-14 win at home over a stingy Old Dominion team. The win was impressive due to the fact that they turned the ball over 3 times to ODU’s sole turnover.

Virginia racked up 513 total yards and after falling behind 14-13 with 1 minute remaining, Brennan Armstrong used his arm, his legs, and an ODU penalty to matriculate the ball down the field and set up a game-winning 26-yard field goal from Brendan Farrell.

Syracuse is off to one of their best starts to a season in recent years. They are 3-0 with wins over Louisville and Purdue. After minimal scoring through 3 quarters last week, Syracuse and Purdue combined for 42 of the total 61 points in the 4th quarter.

Garrett Shrader did what it took to get the win. He threw for 3 touchdowns and led the team in rushing with 83 yards on 17 carries. Oronde Gadsen was his favorite target, as they connected for 112 yards and 2 scores.

Syracuse is definitely a formidable team; however, we don’t believe they should be double-digit favorites here. The line seems to be inflated after their Purdue win.

Virginia had an ugly loss to Illinois and then squeaked by ODU, leaving the public obligated to go heavy on Syracuse here. We don’t expect Virginia to win this one outright and believe a backdoor cover would be more likely. However, we like the points here on the road.

Key Trends for Virginia at Syracuse