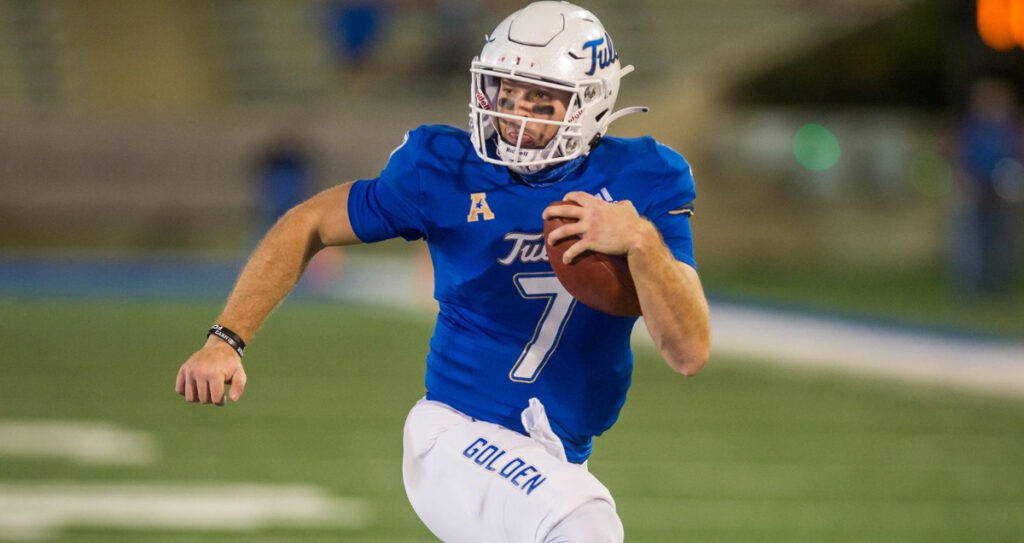 One of our 2 college football best bets for Friday is on Davis Brin and Tulsa!

Though the Friday CFB slate isn't exciting, we still have 2 opportunities to make money! The Tulsa Golden Hurricane will host the South Florida Bulls at 9 PM Eastern Time on ESPN2. In the 9:45 PM slot on FS1, we're treated to San Diego State at New Mexico.

Neither of these games will necessarily be considered must-see TV, but the money won on these is just as green as what's won on the SEC or Big 10. Here are 2 college football best bets for Friday, November 18. Let's cash!

The South Florida Bulls are having a season to forget as they are currently 1-9 on the year after dropping their 8th straight last week. They were manhandled by SMU at home, losing 41-23. They allowed 270 yards on the ground to the Mustangs and barely broke 200 yards passing on offense.

Brian Battie was the bright spot going for 145 yards on 26 carries. They are allowing 40 points per game to their opponents which is 271st in the country.

Tulsa lost its 3rd straight game last week and now sits at just 3-7 on the year. Their victory over Temple back on October 21st is their only win in their last 7 games.

Against Memphis last week, the game was virtually over at halftime when they fell behind 20-3. Memphis used an aerial attack that went for 262 of their 341 total yards in the victory. Tulsa was held to just 3 of 15 on 3rd down and just 31 yards on the ground.

Tulsa averages more points per game on offense and holds opponents to less than USF. This will be the last chance for Tulsa to pick up their 4th win of the year as they travel to Houston next week to end their season.

We expect the Golden Hurricane to take this game much more seriously than the Bulls who have basically given up on their season. Let's lay the points with the home team.

The Aztecs are having one of their weaker seasons in recent memory as they sit at 6-4 with just 2 games remaining in their regular season. After losing on the road to Fresno State they have won back-to-back games against both UNLV and SJST at home.

In the win last week, SDST exploded for a season-high 43 points. Jalen Mayden went for 3 touchdown passes and 268 yards while tossing just 1 interception.

New Mexico and USF have had very similar seasons. The Lobos are 2-8 and are on a 7-game losing streak.

They were held to only 3 points last week against Air Force who imposed their will on the ground rushing for over 400 yards. The Lobos never got their run game going and finished with just 44 yards on the ground.

New Mexico has been a much better team at home than on the road this season. We believe with it being their final home game of the year and the final home game for many seniors, the Lobos are going to keep this one closer than 2 touchdowns.

The Aztec defense is just weak enough to allow the Lobos to hang around in this one and get the cover. We'll take the large number of points with New Mexico in this one.