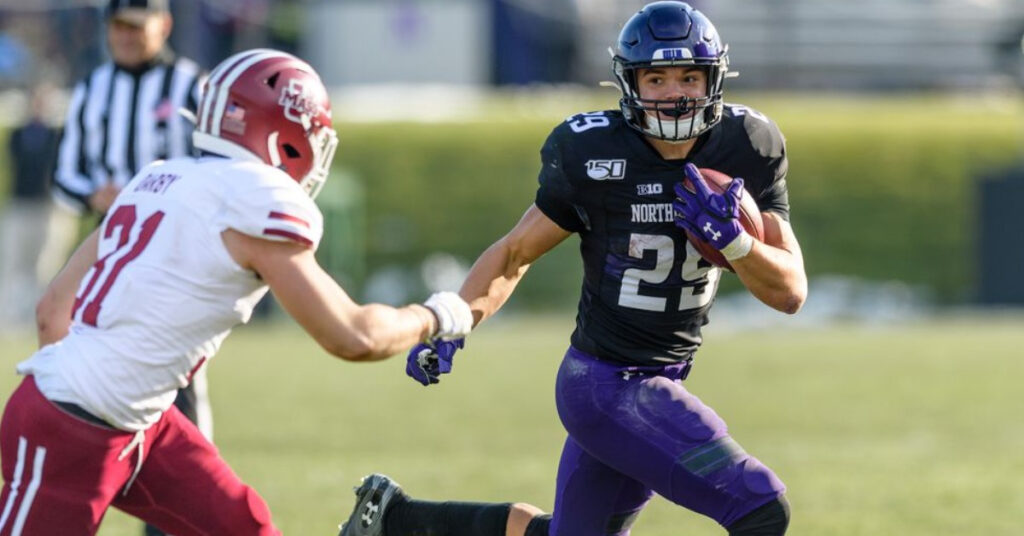 Evan Hull is a big reason why we like Northwestern to cover the big number against Nebraska in Week 0.

It is the pseudo opening weekend of NCAA Football this weekend which has come to be dubbed “Week 0”. I for one, could not be more excited about it. This weekend signals the end of the summer and for us bettors, it signals the most action available time of the year.

We have maintained a winning percentage in CFB of just under 55% over the past few seasons (54.72%) and look to continue that profitability this season. It all starts this weekend when the big-name schools are not in play, but the value can still be found on the board. Here are 2 college football best bets for Week 0.

Scott Frost has his rear firmly on the hot seat this season. He has failed to get a winning season and bowl bid in his tenure at Nebraska. However, he made a big play in the offseason by bringing in Texas transfer Casey Thompson to take over for Adrian Martinez.

Frost also grabbed some talent at the WR positions. The biggest fear for Husker fans is going to be their secondary. They lost 3 of their 4 starters from last year, a group that was pivotal in keeping opponents to under 225 yards passing and just 24.1 points per game.

231 yards per game on the ground is what this Northwestern team allowed in 2021. Head coach Pat Fitzgerald was seemingly left with his pants down following the retirement of defensive coordinator Mike Hankwitz in the 2021 offseason.

Fitzgerald has had a full offseason to fix the rush defense and the direction of the program. The offensive line has seemed to improve but will be tested in this opening game.

8 of Nebraska’s 9 losses in 2021 came by less than one possession. And while we would expect Scott Frost to be sure on putting opponents away in 2022-2023, it won’t be easy with a brand-new offensive group on a field far away from home.

That coupled with the fact that we can not see the Northwestern run defense being any worse than last year, has us on the side of the dog here. This is just way too many points!

Key Trends for Nebraska vs. Northwestern

North Texas had a big year on the ground in 2021-2022. In fact, they were 5th in the nation in rushing yards per game. However, they did lose leading rusher DeAndre Tony, who had 1215 yards and 13 touchdowns last season.

Their offensive line will be in good shape though. They lose only Jacob Brammer to the transfer portal and bring back their other 4 starters.

The issue for North Texas is going to be their defense. After making strides from 2020-2021, they lost a good number of starters and will be very limited in terms of depth.

While North Texas has an extremely strong offensive line, the Miners of UTEP may have an even stronger one. Deion Hankins and Ron Awatt should flourish even more carrying the rock behind the stout line.

Defensively, the Miners return 8 total starters, including 7 all-stars. Praise Amaewhule will have many singing his name in regards to being one of the best in the country at rushing the passer. UTEP has the talent to make a run in Conference-USA this season.

Early in the season for NCAA Football, we like to lean on teams that have a healthy number of starters returning from groups that were successful in the previous year. UTEP fits that bill on both sides of the ball.

Another intriguing piece of this handicap is that the number of bets and money coming in is heavy on North Texas. Over 65% of both are on the Mean Green. However, oddsmakers are lowering the line to near a pick, which is a good sign for our Miners.