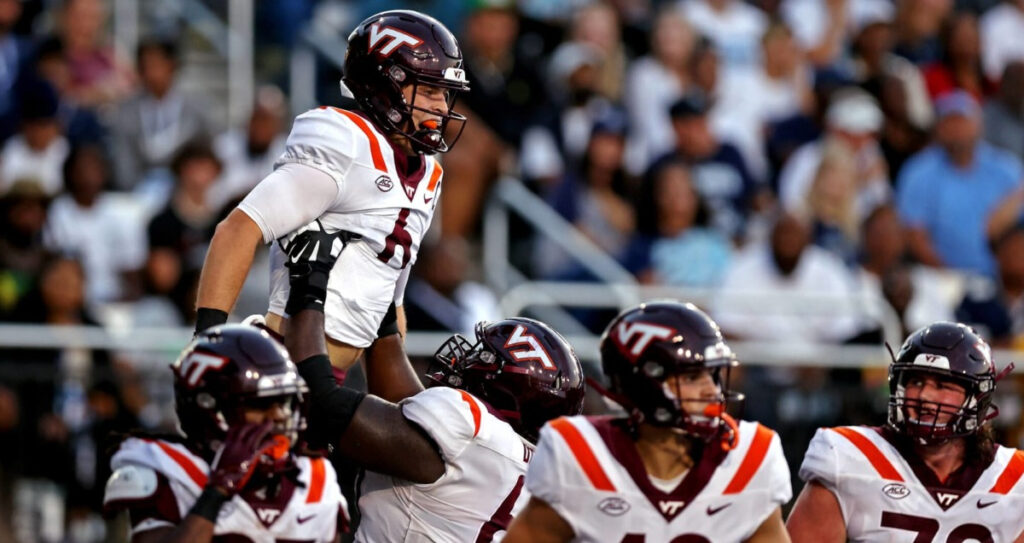 We are looking for Grant Wells and Virginia Tech to pull off the upset against West Virginia on Thursday night.

Last week we were void of NCAA Football Games on Thursday, but this week, we have a decent little slate to look at and find some value. The Mountaineers of West Virginia are headed to Blacksburg to take on Virginia Tech while the Chanticleers of Coastal Carolina hit the road to take on Georgia State.

The oddsmakers have set the spreads at an almost identical number while they believe the Coastal Carolina vs Georgia State game will provide a higher scoring total. We take a look at both games below and will give you what we believe is the best plays from this slate. Here are 2 college football best bets for Thursday, September 22.

West Virginia is coming off their 1st win of the season. They dismantled a weak Towson team, 65-7. That win proceeded with losses to Pittsburgh on the road and then to Kansas at home in a very high-scoring game 55-42.

While they have had no trouble putting up points (46.0ppg) and ranking 17th in the country, they do have trouble stopping opponents. They are allowing an average of 33.33ppg and that includes last week where they held Towson to just 7. They have used a balanced offensive attack where they are averaging just shy of 300 yards passing per game and just over 215 rushing yards per game.

The Hokies are off to a 2-1 start that was kicked off with a 20-17 loss at Old Dominion in week one. After that loss, they picked up wins over Boston College and Wofford at home. They outscored those opponents 54-17.

It has been the defense of the Hokies that has led the way. They are 23rd in the nation, allowing just 12.33ppg. Now, this Mountaineer offense will be their toughest test, but the same can be said about the former.

The Hokies are in a serious comfort zone right now. They had their wake-up call-in week 1 when they fell to Old Dominion on the road. Now they are playing their 3rd straight home game.

West Virginia is heading to the road for the 1st time since week 1 where they lost and also have matchups with Texas and Baylor coming in their next two games. We believe the Hokies' defense will hold the Mountaineers in check and get the outright win but the points can be taken as a cushion.

Coastal Carolina is 3-0 to start the year and has played all of their games at home. Their latest win came against Buffalo 38-26. They needed a big 4th quarter to pull away.

After trailing by 2 at the half, the Chanticleers put up 24 in the 2nd half while allowing just 10. They are averaging 35.7 points per game and have been led by Grayson McCall, who is hitting receivers at a 70% completion rate. He's thrown just 1 interception to his 9 touchdowns. They will hit the road Thursday for the 1st time this year.

Georgia State has yet to get a win this season as they sit 0-3 on the year. After losing to South Carolina and North Carolina, they faced an underrated Charlotte team last week.

The Panthers took a 6-point lead with just 1:45 remaining. In just under one minute and 20 seconds, Charlotte got down the field and scored the game-winning touchdown to close out the game 42-41.

The Panthers lean on a run-heavy offense that is averaging 230 yards per game that ranks 27th in the country. Three running backs have already tallied 150 yards with Darren Grainger being 2nd on the team with 170 yards. Grainger has also been decent behind center where he has 8 touchdowns to just 2 interceptions.

This line just makes absolutely no sense. We have an undefeated Coastal Carolina squad giving less than a field goal to a Georgia State team that has yet to find a win.

The public is all over Coastal and that just drives home the initial thought we had of fading the public. Similar to the Virginia Tech game, we expect the home teams to get the victories here but we will take those points just in case.