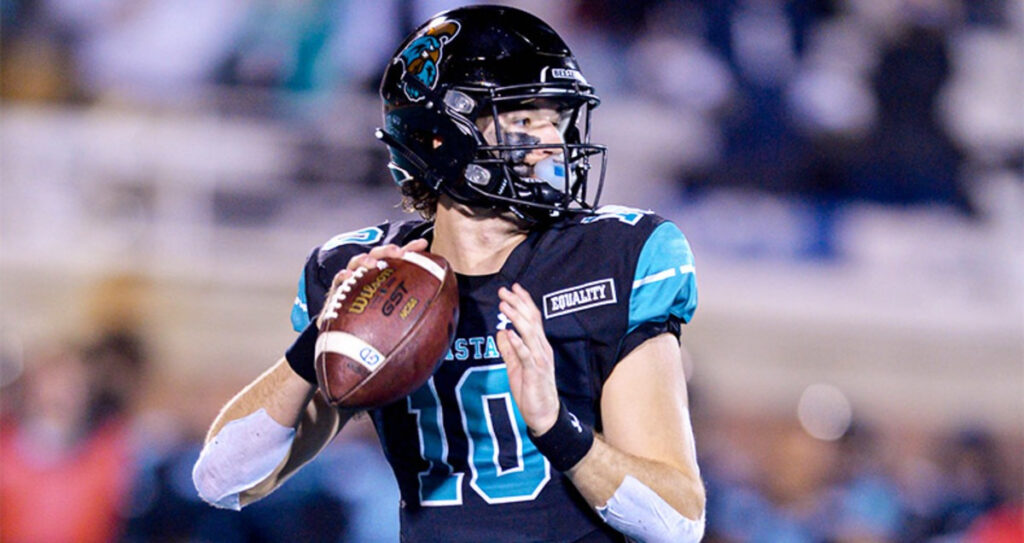 Can Grayson McCall and Coastal Carolina pull off the upset against App State?

Thursday night brings us college football on TV for the third night in a row, which is a beautiful thing! Though neither of the matchups are considered stellar, the money won on these games is just as green as the money won on a premier SEC tilt.

We've isolated two best bets for Thursday, November 3. Let's get the weekend started off on the right foot.

The Miners are just 1 game below .500 after their 24-13 loss at home to Middle Tennessee State last week. They had won 3 of their last 4 prior to the MTST game.

After coming within just 4 points on a 47-yard field goal, the Miners allowed a 75-yard touchdown just 15 seconds later when Chase Cunningham hit Jaylin Lane for his 3rd touchdown pass on the day. The Miners never got their offense clicking as they accumulated just under 300 total yards in the game.

Rice is hoping to avoid going under .500 in this matchup after losing last week to Charlotte 56-23. That loss put them at 4-4 on the year.

Rice took a 17-14 lead midway through the 2nd quarter before Chris Reynolds went off in the 3rd quarter. Reynolds tossed 3 touchdown passes and put the 9ers up 49-17 as they headed into the final quarter. Rice allowed over 225 yards on the ground and 275 yards through the air in the loss.

Rice has the ability to score northwards of 30 points in a game while the Miners are struggling to get over 20 in a game. We think UTEP's secondary could have a tough time stopping Luke McCaffrey, who leads the team with 613 receiving yards and 6 touchdowns.

The defenses are similar in mediocrity but Rice is much stronger on 3rd down and will keep drives alive in what should be a lower-scoring Thursday night affair. This one may be a bit ugly to watch but we'll gladly lay the points.

Is App State back? That is the question that everyone in Boone, North Carolina is asking. After falling to Texas State in their worst loss of the season, the Mountaineers have bounced back and won back-to-back games by a combined total of 64 points.

They have been tremendous against the pass all year long. Offensively, they have leaned a bit more on the run game as they surpassed 400 yards on the ground against the Georgia State Panthers.

Coastal Carolina is 7-1 on the year after winning their contest last week against Marshall on the road 24-13. This game was significant as it was the 1st game after their 1st loss of the season which came at home to Old Dominion just 2 weeks prior.

After jumping out to a 21-0 lead after the 1st quarter against Marshall, the Chanticleers coasted to the 24-13 win. They forced 2 turnovers which helped overcome the 320 yards they allowed through the air.

Appalachian State has been too susceptible this season to back in a game where they are facing the top team in their conference, particularly on the road. We will agree, that this line seems off as the 7-1 home team are dogs here but we will fall for the trap if it is one, hook, line, and sinker.

Grayson McCall should be able to keep this one extremely close and use his 19-1 touchdown to interception ratio to the Chants' advantage. We also think running back CJ Beasley can have some success on the ground as well. Take the points!